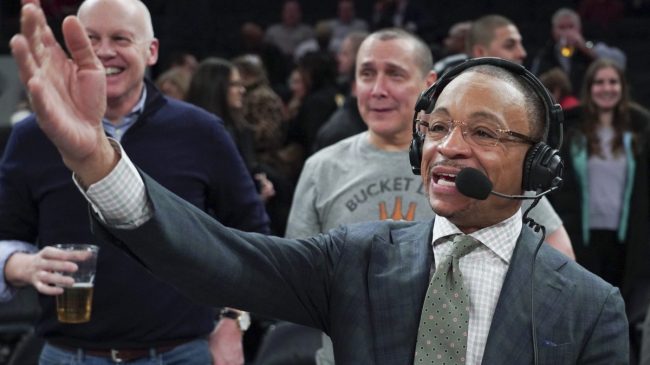 Gus Johnson is one of the all-time greats of sports broadcasting. His unmistakable calls have graced many-a-great college football and basketball games over the last two decades.

Whether it’s a great moment for your team or a brutal moment that came against it, odds are most sports fans have a favorite Gus moment.

Who could forget his unmistakable call of this wild Kirk Cousins touchdown just a year ago? Or how about his incredible narration of Penn State’s game-sealing interception against Wisconsin?

But fans were robbed of the opportunity to hear another potentially great one on Saturday.

Gus Johnson Forced To Leave Nebraska-Oklahoma Early Due To Illness

Johnson was on the call alongside Joel Klatt for FOX’s Big Noon Game of The Week on Saturday. The game saw a desperate Nebraska Cornhuskers team welcome the Oklahoma Sooners to Memorial Stadium.

The Huskers got out to a fantastic start with an early touchdown punctuated by a great Gus call.

Casey Thompson drops a 32-yard DIME to Trey Palmer for the first touchdown of the game against No. 6 Oklahoma.

But the Sooners quickly came storming back and took a commanding 35-7 lead into the half. The only hope remaining for an entertaining second half was the Law of Gus.

That quickly went out the window when news broke that Johnson got sick at the half and had to leave the booth. Fans watching were left stuck listening to a solo Joel Klatt broadcast the rest of the way.

Here's to a quick recovery for the best in the business and that this is nothing too serious. https://t.co/6j55bHf8vp

Others were quick to blame the Huskers.

We saw the game, too.

Here’s hoping for a speedy recovery for one of the greats.