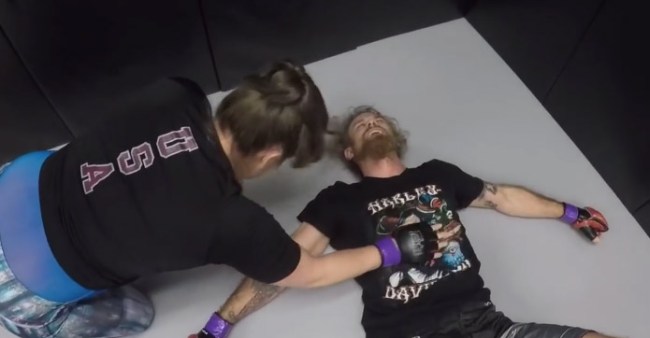 Kristopher Zylinski, internet troll, claimed that, as a man, he could beat any woman in MMA. Mixed martial arts veteran Tara LaRosa begged to differ.

Writing on Facebook, Zylinski stated, “99% of woman are too weak and lack the reflexes to do enough damage to stop 99% of men. Even if they knew bjj [Brazilian jiu-jitsu] they just don’t have the size of strength to use the holds. Its dangerous to teach any woman to try and strike or fight a man. Just my 2 cents. [sic]”

Doubling down on his boast, Kristopher revisited Facebook later to write, “I’m not hitting a woman with a closed fist unless she is attacking me. If you want to set up an MMA fight between me and a girl with signed contracts, sure, I’m down. I want money when I win though and you must apologise.”

Shortly thereafter, the people who run McDojoLife got wind of this challenge and put things in motion.

“We are willing to pay out $1,000 to any pro female 160-pound fighter willing to come and spar with this man,” they wrote. “We will also provide plane ticket and hotel.”

As you can imagine, there was no shortage of female applicants willing to lay the smack down on Kristopher. However, it was 15-year MMA vet Tara LaRosa who ended up getting the call.

So, not only did he tap out, LaRosa gave him a second chance and, yep, he tapped out again, saying, “I can’t do shit.”

On the plus side for Zylinski, at least he fared slightly better than Steve-O did when Chuck Liddell got his arms around him.