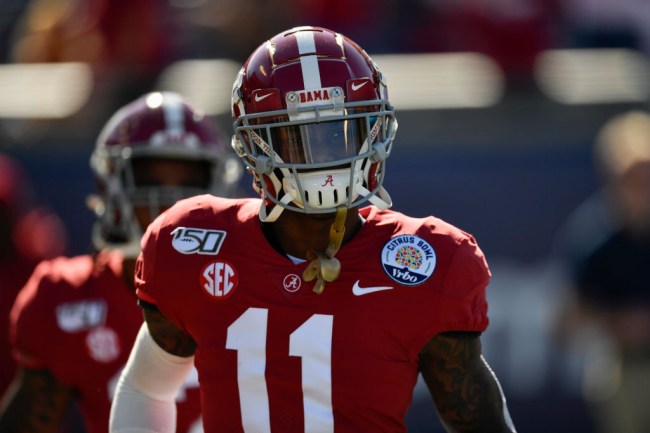 Moving is a pain in the ass, even if you just so happen to be a first-round NFL draft pick like Henry Ruggs III. Ruggs, who was drafted 12th overall by the Raiders back in April, has reportedly suffered what sounds to be a rather serious cut to his thigh while moving things into a trailer.

Ruggs’ father told AL.com that the trailer pinned him up against the car or wall and did some damage to his thigh.

“He was trying to move a trailer or something — move furniture or something — and the trailer just kind of pinned him against a car or a wall or something,” Henry Ruggs Jr. said. “He’s pretty much OK, I’m about to go out there and see him in a little bit. It was just like a little open wound on his leg, a little incision. Like something had stuck him right there on his thigh a little bit.”

According to ESPN, the Raiders are aware of the injury but will not be commenting on the report. Ruggs’ father stated that his son is “just having to walk on crutches, not putting as much pressure on it.”

It’s unknown at this time whether or not Ruggs received any stitches for the cut, but if he’s having to walk on crutches it’s safe to assume that the furniture/trailer did some damage to his leg.

Ruggs was the first receiver selected in the 2020 NFL Draft and was responsible for the fastest 40-time at the NFL combine after running a 4.27 second 40.