Talk About Your All Time Days, Girl Gets Crowned Homecoming Queen Then Kicks Game-Winner In Overtime 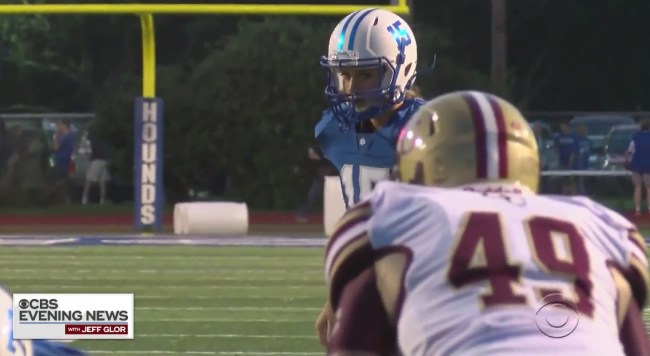 How’s this for a day? Senior Kaylee Foster was crowned her homecoming queen at Ocean Springs High School in Ocean Springs, Mississippi. Then she took off her tiara, strapped on a helmet and some pads, and kicked the game-winning extra point in overtime in her team’s homecoming game.

In fact, out of her team’s 13 points in the victory Foster was responsible for seven of them with two field goals and an extra point.

Ocean Springs wins 13-12. @_kayleefoster kicker for the Greyhounds scores the winning field goal in overtime. She was also crowned the homecoming queen earlier in the evening. pic.twitter.com/Pd71Hmwzkz

CNN reports that Foster is no novice when it comes to kicking a football either. She was five-years-old when a football coach first approched her to kick after seeing her playing kickball. Since then she’s kicked for a team from seventh grade on up to the high school varsity.

So far this year, Foster has made all 11 extra points and three field goals.

But don’t look for her to be kicking footballs in college like another girl who made a name for herself kicking field goals, Becca Longo. Foster says soccer is still her first love and in college the football season and soccer take place simultaneously.

After the game, the Mississippi Press reported…

…she was told after the game that a 9-year-old girl, hearing from her father that the homecoming queen had kicked a field goal for Ocean Springs, said “That’s the kind of girl I want to be.”

“Oh my goodness,” Foster said. “I love that. I think that is so special. I hope she really does decide to play football, because it’s been wonderful and taught me so much. I really appreciate that.”