The Houston Astros Are Being Accused Of Cheating, Again, With Claims Of Whistling On Certain Pitches 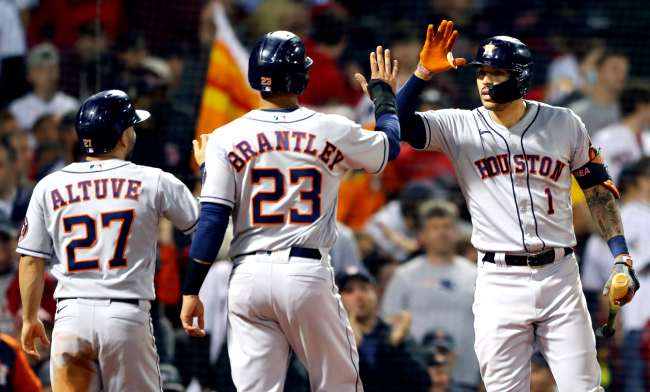 After cheating their way to a World Series win in 2017 and making another World Series in 2018, it’s going to be awhile before people stop looking for signs that the Houston Astros haven’t changed their ways.

After all, the punishments handed down by Major League Baseball’s spineless commissioner Rob Manfred for illegally stealing signs for at least two seasons was nothing more than a slap on the wrist. So why would they stop if it means winning another World Series and benefiting from all that comes with it?

Not that the Astros are still cheating. They might be. They might not. Regardless of what they are doing or not doing, they are under a microscope wielded by both fans as well as MLB players.

The latest accusations about the Astros possibly cheating while hitting gained some steam after Houston mollywhopped the Boston Red Sox the past two nights, 9 to 2 and 9 to 1, after being soundly defeated by Boston in the two previous games.

And once again, as it was during the 2019 American League Championship Series, the Houston Astros are being accused of using whistles to communicate what pitches are coming to their hitters.

Whistling?
MLB was on the Astros about this two years ago.https://t.co/Sx8gBwZpIv

Listen for the whistles just prior to two of the Astros’ home runs on Wednesday night.

Why is there a whistle coming from the dugout at the 2 second mark? 🧐 pic.twitter.com/dgCXcjsAnz

So the Astros cheated in 2017 as we all know and were barely punished. Now in 2021, they’re back at it. This time, they’re using whistling to signify what pitch is coming. Straight whistle = fastball, two whistles = off speed (more specifically a curveball) #MLB #Astros #MLBPA

Thanks to @Lockhart81 who pulled it today

Whistles before EVERY single big hit last night. Whistle before the Altuve HR in G3. Whistles in Chicago after Tepera's comments

All the sudden when the Astros are up big, they stop 🤔 https://t.co/LXFKk0wFyi

That whistle has been tracked through the entire series. Stopped after they were up 6-0 last night. Astros cheating again?🤔

The Astros were also accused of using whistles to communicate what pitches were coming during their 2017 World Series championship run.

Thursday morning, 98.5 The Sports Hub’s Toucher and Rich Show delved even deeper into the conspiracy.

Umpires stopped the game because there was a light switching on and off in center field? What are the Red Sox up to? pic.twitter.com/6cfRz6VpD1

Maybe both teams are cheating. It’s not like the Boston Red Sox and their manager Alex Cora haven’t done their fair share of it as well in recent years.