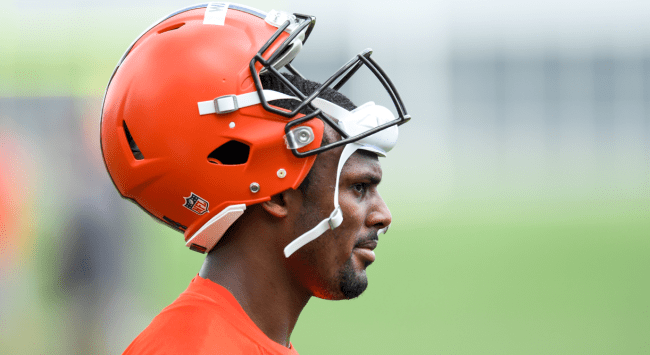 Of the 23 pending civil lawsuits filed against new Browns quarterback Deshaun Watson, at least three of Watson’s accusers worked at the same spa in Houston owned by a woman named Dionne Louis.

According to a deposition transcript obtained by USA Today, Louis recently testified in one of the cases that Watson gave her $5,000 on Cash App.

Louis claimed in her testimony that Watson made the $5,000 payment to her simply because “he’s a nice person.”

Deshaun Watson’s latest, and 23rd, accuser, Nia Smith claimed in her lawsuit that Louis facilitated massage sessions for Watson and knew that he would be attempting to have sex with the massage therapists.

Smith’s lawsuit also includes text messages from Louis to Watson in which she discusses the fact that he gave her $5,000, and wrote, “I told you I’ll show you how to get money from men that’s my specialty.”

Also in the petition filed by Nia Smith it is pointed out that Louis invoked her Fifth Amendment rights against self-incrimination when she was questioned about text messages she had written to and received from the new Browns quarterback.

Louis, responding to Smith’s allegations, told USA Today that “all of that is ludicrous” and that Smith “has a pattern of doing this type of stuff.”

Watson’s attorney, Rusty Hardin, has also denied Smith’s claims, writing in a statement, “Deshaun Watson vehemently denies the allegations, just as he has since she first discussed them with members of our firm in March of last year. She repeated the allegations on social media in August and he denied them then. The only thing new about her contentions is the embellishment making them more extreme than prior versions. Deshaun’s denial remains the same.”