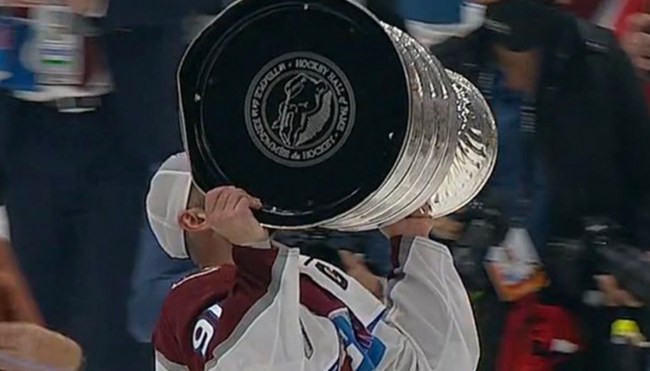 The Colorado Avalanche were widely viewed as the most talented team in the NHL this season, and on Sunday night, they officially lived up to the lofty expectations that surrounded them for most of the campaign by taking home their first championship since 2001 after dethroning the Lightning with a 2-1 win in Game 6 to cap off the Stanley Cup Finals.

It didn’t take long for the traditional postgame celebration to go slightly awry, as winger Nicolas Aube-Kubel accidentally channeled his inner Rob Gronkowski by putting a noticeable dent into the base of the Stanley Cup after he stumbled en route to joining his team for a group picture.

Philip Pritchard, who has one of the coolest job titles in existence as the “Keeper of the Cup,” spoke with KDVR following the mishap and acknowledged the somewhat unprecedented nature of the situation, saying, “Five minutes into the presentation it’s happened. It’s the first time it’s ever happened on the ice.”

However, this is far from the first time Lord Stanley’s trophy has become a casualty of a championship celebration. It’s been less than a year since the Hockey Hall of Fame had to send the piece of hardware to Montreal after Patrick Maroon managed to put an even more impressive dent in the Cups’ bowl during Tampa’s victory parade, but those accidents are just the tip of the iceberg when it comes to the damage it’s been subjected to over the decades.

In fact, the most recent incident is pretty tame when you take a look at what the Stanley Cup has been subjected to over the years.

All Of The Times The Stanley Cup Has Been Damaged

Congratulations to the Avalanche on becoming the newest members of an even more exclusive club than the one they joined with Sunday’s win.