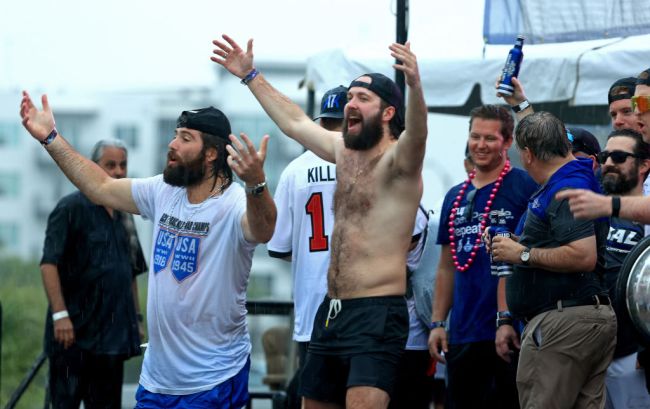 He celebrated in style on Monday and was throwing beers to fans during the championship boat parade.

Having played on the Saint Louis Blues in 2019, the 33-year-old Maroon has not lost a playoff series in the last three years.

Last year, because of COVID-19, the Lightning decided to take their championship parade to the water. The boat parade was such a success that it has become a tradition within the city and the Buccaneers did the same thing after winning the Super Bowl. Gronk couldn’t stop dancing and TB12 was lit.

In the first Champa Bay parade, Maroon was the life of the party. That was the case again on Monday.

That should come as no surprise for someone who had his mom drink beer from the Stanley Cup.

Pat Maroon getting his mom to chug beer out of the Cup.
Why am I not surprised 😂 pic.twitter.com/oFZPc0ATlg

All of the city’s hockey fans were on the water when they arrived.

Those who weren’t on the river lined the waterfront.

What happened next was an absolute party and the Bolts dressed for the occasion.

Not long thereafter, the festivities got underway and Maroon was bringing up the rear, but leading the charge.

Pat Maroon bringing up the rear, along with Ryan McDonagh, showing he’s the Pied Piper of boat parades. Everyone wants to give him a beer.#gobolts #StanleyCup pic.twitter.com/IHgIxVxaVo

Although Maroon is known as the party skipper, his teammates were also having themselves a day.

Yanni Gourde is having an okay time in the @TBLightning boat parade… 😂 pic.twitter.com/KgFUp0d0zV

Tampa goalie Andrei Vasilevskiy was named the Most Valuable Player in the playoffs and won the Conn Smythe trophy. He wore it on his head during the parade.

Meanwhile, Maroon was sauced and gave some incredible interviews.

🤣😂@WFLAJosh just asked Pat Maroon how it feels to win three #StanleyCups in a row and how it will feel if he ever loses one.

He didn’t even have to be the subject of the interview to command the spotlight.

“This is Florida. This is Tampa. This is the way it should be.” 💪

Ryan McDonagh talks about how awesome it is to have a boat parade in Tampa…as Pat Maroon crushes a beer. 😂 https://t.co/cSVzjA0Kgf #GoBolts #StanleyCup pic.twitter.com/WbLK12vLKe

Even when the parade was over, Maroon kept pounding suds.

Tampa Bay, and Maroon in particular, celebrated hard— maybe a little bit too hard? (There is no such thing.)

Somewhere along the line, the Stanley Cup took a tumble. The party went so hard that the trophy itself was damaged.

The Stanley Cup has had quite a day. 😅

It was quite the day in Tampa Bay.

Have a look at this epic scene from the Hillsborough River! 👀

STANLEY CUP CHAMPIONS: The Tampa Bay Lightning celebrated their Stanley Cup win with a boat parade on Monday (7/12). The NHL players passed the trophy around and even brought it for a ride on a jet ski! Check it out: pic.twitter.com/5Hh98edjCE

Will the Bolts make it three in a row? Will Maroon make it four?