How Much Would You Pay For this Fight Card? A (Pseudo) Realistic Look at UFC 249: Khabib vs. Ferguson 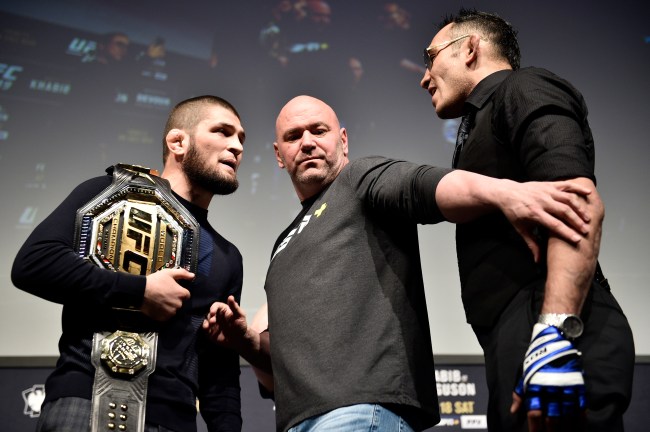 Huge story in the fight world this week. UFC light heavyweight champion Jon Jones was arrested in Albuquerque for DWI and negligent use of a firearm.

But this is not that story …

Rather, it’s time to consider the future of the UFC, and sports in general.

Given the current Coronavirus pandemic, no one knows exactly when professional sports will return will return to action. Well, UFC president Dana White kind of has an idea.

He’s saying it’s April 18, but he’s not telling the media anything else, yet.

Dana White says not only can he safely stage UFC 249 on April 18, its somethings he needs to do. “We need somebody to be the first guy to step forward and say, ‘come on guys, let’s snap back and get going.’” https://t.co/6AcUZRtq31 pic.twitter.com/nyjBRKEbSl

With the UFC “postponing” a trio of events slated for London, Columbus, and Portland after hosting an event in Brazil on March 14, White has maintained his intention to still promote the upcoming lightweight title fight between champion Khabib Nurmagomedov and challenger Tony Ferguson. It’s one of the most anticipated fights in MMA history.

Unwilling to delay the fight — Khabib and Ferguson have previously been slated to face one another on four occasions dating back to 2015 — White is adamant that UFC 249 will go ahead, although not as originally scheduled.

In terms of location, no one knows where UFC 249 will take place.

With New York currently at the center of the COVID-19 outbreak in the United States, the Barclays Center in Brooklyn (the original venue) is no longer an option. In fact, many believe that South Korea, the United Arab Emirates, and Saudi Arabia are the leading candidates to host UFC 249 (for the record, I believe they should do it one the White House lawn).

White is staying hush about the new venue.

Some humorous odds released for where UFC 249 will take place via @betonline_ag.

Florida is the favourite. pic.twitter.com/Ou4Fn0WZJt

According to White, the UFC is shuffling the deck in a major way for its 249th Pay Per View, planning a mega fight card for April 18. White has already mentioned that a heavyweight bout between Francis Ngannou and Jairzinho Rozenstruik, originally slated to headline the Columbus, Ohio event this Saturday, could likely end up on the new (and improved?) UFC 249. From there, it’s anyone’s guess.

According to many managers, the UFC has already expressed interest in fighters who reside in the United States, as travel restrictions will make it nearly impossible for the dozen or so foreigners originally booked for UFC 249 to pass immigration and customs. This of course includes headliner Khabib Nurmagomedov, who is currently back in his native Russia, which goes into lockdown on March 30.

If the UFC can somehow get Khabib to the venue … they can certainly fit his teammate, friend, and training partner Islam Makhachev into the overhead compartment for his bout against Alexander Hernandez.

But what other bouts could end up on UFC 249?

Looking at the schedule of “postponed” fight cards, there are a number of really intriguing bouts that feature U.S.-based talent. In particular, a fight between undefeated middleweight Edmen Shahbazyan and Derek Brunson, which was originally slated for the UFC 248 PPV main card, only to be rescheduled for April 11 in Portland, Oregon, would be a perfect addition to UFC 249, as Shahbazyan has established himself as a young contender on the rise.

A heavyweight bout between Alistair Overeem and Walt Harris, which was originally scheduled to headline UFC Portland would definitely boost interest, also seems like a logical choice to beef up UFC 249. As would a featherweight bout between UFC veteran Jeremy Stephens and ninth-ranked Calvin Kattar. Those two have already been training for some fisticuffs on April 18, so let ’em bang, as they say.

Other holdovers from UFC 249 that would make sense on the new card are a welterweight bout between Vicente Luque and Randy Brown, along with a middleweight contest between Jacare Souza and Uriah Hall. Those are strong matchups with exciting fighters, in particular Luque who is coming off of a Fight of the Night performance at UFC 244.

While logic dictates that the majority of fights on the new UFC 249 card should involve fighters who were in training camp for the trio of postponed events, White is promising the baddest card ever, or something, so it seems worthwhile to ponder a few other big-time fights that aren’t on the books yet. Like, a matchup between former welterweight champion Tyron Woodley and former interim welterweight champ Colby Covington.

There have been rumblings that the two are looking to finally throw down.

For years, the former teammates have been involved in an ugly war of words and trash talk. And, while a bout never materialized back in 2018, when Woodley held the strap and Covington was next in line, this might be the perfect time for such a fight.

And then there’s former strawweight champion “Thug” Rose Namajunas, who was set to make her long awaited return to the Octagon at UFC 249.

Away from action for close to a year, Namajunas was set to rematch Jessica Andrade 11 months after their first fight, which ended in a title-changing KO slam loss for “Thug.” However, Andrade resides in Brazil, and will most likely not be able to travel to UFC 249.

Instead, I’m proposing Claudia Gadelha, another Brazilian, who lives in Las Vegas and trains in New Jersey. Gadelha recently had a bout cancelled at UFC 246: McGregor vs. Cerrone when her opponent missed weight. This might be the perfect opportunity for Gadelha to not only earn that paycheck she missed out on, but also to reestablish herself as a contender. Besides, she’s already in camp for a May 2 fight in Oklahoma.

We’re still weeks away, so it remains unclear if this UFC 249 fight card will happen, but Dana White has already challenged everyone who thinks he can’t pull this off. He’s adamant that the show must go on.

Now, about that private jet to get the fighters to the venue …