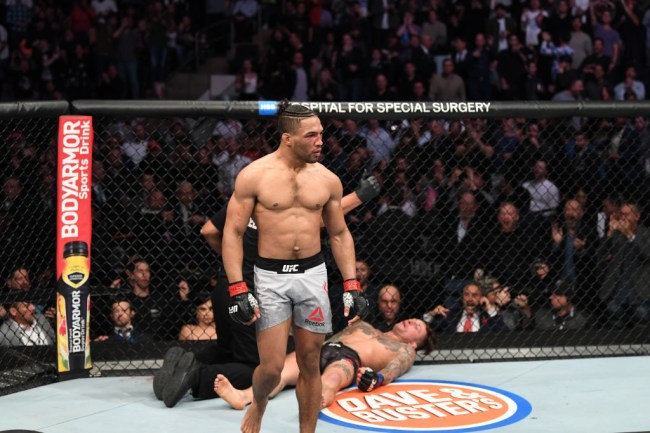 All eyes will be on the UFC tonight. It’s basically the only major sport still operating this Saturday night, now that the Coronavirus has basically wiped every sport and event out of existence.

There is no doubt that tonight’s UFC Brasilia card, headlined by top-15 lightweights Kevin Lee and Charles “Do Bronx” Oliveira, will proceed under some air of controversy. The MMA giant has been scrutinized for its decision to continue promoting events, but the show will go on, and 24 fighters will compete inside the Octagon. Actually, it’s a really good Fight Night card, so here are a few reasons to tune in for the UFC Brasilia card, which airs at 3:00 p.m. PST / 6 p.m. EST on ESPN and the ESPN+ app. Prelims kick off at 12:00 p.m. PST / 3 p.m. EST.

Still just 27 years old, lightweight Kevin Lee has been near the top of the division for close to three years, using his athleticism, wrestling, and boxing to go 11-5 inside the Octagon.

Lee is always a threat. He’s a phenomenal fighter who is in the midst of a career reinvention, and if he demonstrated anything in his last performance, a stunning head kick knockout of Gregor Gilespie at UFC 244, it’s that Lee is on the right track.

Working with Firas Zahabi, the famed trainer of UFC legend Georges St-Pierre at Montreal’s Tristar Gym, Lee has brought a whole new level of fight IQ and strategy into his fight camp, and he’ll need it against Oliveira, the most dynamic submission artist the UFC has ever seen.

While a win here won’t necessarily propel Lee too much further up the lightweight division, it will keep him relevant and on a collision course with heated rival Islam Makhachev. Lee has already stated his intention to fight Makhachev in Russia, and a win at UFC Brasilia will help him land that fight.

When Oliveira Fights, Anything Can Happen, But Mostly Submissions

Before coming to the realization that Charles “Do Bronx” Oliveira is just 30 years old, remember that he’s been fighting in the Octagon for nearly 10 years. That’s sort of mind blowing.

Now, consider the rest of Oliveira’s accolades. During his decade with the UFC, Oliveira has gone 16-8 (1 No Contest) in the Octagon, winning 15 fight night bonuses. Oh, and he just so happens to be the UFC’s all time submission leader with 13. That’s a wild figure, honestly. That’s more submissions than Royce Gracie, the OG submission master of the UFC. That’s even more than Nate Diaz and Frank Mir. It’s also more than Demian Maia, who also competes at UFC Brasilia, but this segment is about “Do Bronx.”

Oliveira has never looked better inside the Octagon, and UFC Brasilia represents the biggest fight of his tenured career.

Riding a six fight win streak (all of those victories coming by finish), Oliveira has been unstoppable since 2018. He’s added an added element to his striking game, which, when paired with the greatest submission skills in UFC history, is a dangerous combination.

Who’s the Best Pure Grappler in the Welterweight Division?

Even at 42 years of age, Maia, who is ranked fifth in the welterweight division, is always a threat. The former two-time title challenger and eight-time fight night bonus winner enters UFC Brasilia in the midst of a three fight winning streak.

For Burns, UFC Brasilia represents another chance to climb up the welterweight ladder, after returning to 170 pounds in 2019. Currently riding a four fight win streak, which includes a pair of victories at welterweight, Burns has looked better than ever of late. This bout against Maia is the biggest of his career.

Johnny Walker vs. Nikita Krylov Will Be Beautiful Chaos and Violent Fireworks

Someone is winning a fight night bonus here. There’s just no way Walker vs. Krylov won’t be a wild fight.

With Walker returning to the Octagon for the first time since suffering his first UFC defeat, last November at UFC 244, the MMA faithful are curious to see how the biggest hype train of 2019 rebounds after suffering a pretty brutal loss. And Krylov is no cupcake fight.

Nikita Krylov is one of those action fighters who does the whole “kill or be killed” thing in every fight. Consider that through 32 professional MMA fights, Krylov has only heard the final bell once, and that was in a loss. Yes, every single one of his 25 wins has come by way of stoppage. That is a fun and wild fact.

Actually, Walker has also only heard the judges scorecards once in his 21-fight career as well. It’s just another piece of evidence that points to this fight being fun and action-packed.

Don’t be surprised to see some flying knees and head kicks in this one.

Formiga vs. Moreno is the Type of Flyweight Action We’re Here For

The UFC flyweight division might not be everyone’s bag, but it’s impossible to ignore the pace and action of the 125-pound fighters.

Sure, these guys aren’t long on knockout power, but the speed with which they fight and trade strikes is exceptional, which is why this bout between Jussier Formiga and Brandon Moreno, a pair of top-5 flyweights, is the highlight of the UFC Brasilia prelims.

With the status of the division still in limbo, it’s perhaps a bit difficult to understand the context of this fight. It’s unlikely that Formiga or Moreno will fight for a title anytime soon; however, it’s not completely outside of the realm of possibility, which is another reason this fight is so intriguing. There are some high stakes in this bout.

But in the end, it’s mostly about the action, which should be abundant.

UFC Brasilia: Lee vs. Oliveira goes down on Saturday, March 14.