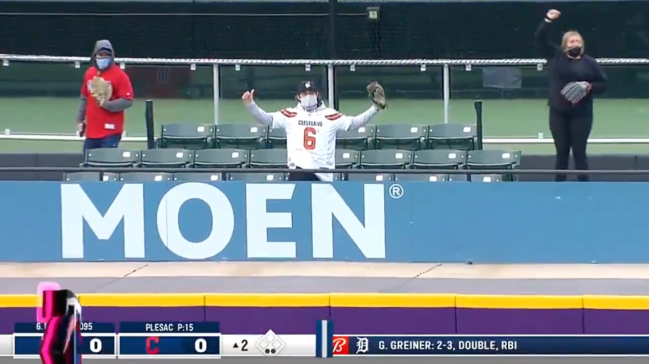 Baker Mayfield has quite the reputation for his ballpark antics at Indians games. The 26-year-old Cleveland quarterback was at a game in 2019 when the camera cut to him in a box suite drinking a beer. He took a big swig from what looks like a Coors Light before putting it down, pointing at a cooler and asking his friend to toss him another. His buddy obliges, Mayfield pops the bottom open with his teeth and shotgunned a cold one. It was pretty epic.

"Coach told me to work on my shotgun formation tonight."

Well, the actual Baker Mayfield was not in attendance at the game between the Indians and Twins on Monday night in a physical sense, but his spirit lived on through a total athlete in centerfield. The fan, sitting just to the right of dead center, was rocking Mayfield’s jersey when Brent Rooker stepped up to bat for Minnesota in the top of the second inning. With two outs and no one on base, Rooker sent the first pitch he saw from Zach Plesac deep to right center for his first home run of the year— where fake Baker Mayfield was there to make an IMPRESSIVE leaping catch. I mean, the dude has some SERIOUS vertical. And look at the flow!!

LOOK AT THIS CATCH FROM THE KID IN A BAKER MAYFIELD JERSEY! 👀👏 pic.twitter.com/fxxtf3aIVh

Unfortunately, the announcers didn’t give the catch (which was more impressive than the dinger) the time of day but thankfully, the producer for Bally Sports North had the wherewithal to throw a replay on the snag. Look at his feet get a solid foot, foot and a half ABOVE the seats!

Heck of a play, Faker Mayfield. See what I did there? Fake Baker? Faker? Thank you, I’ll be here all night.