Shaq And Charles Barkley Dance On The Nets’ Grave, Wonder Who Will Want To Play On That Team 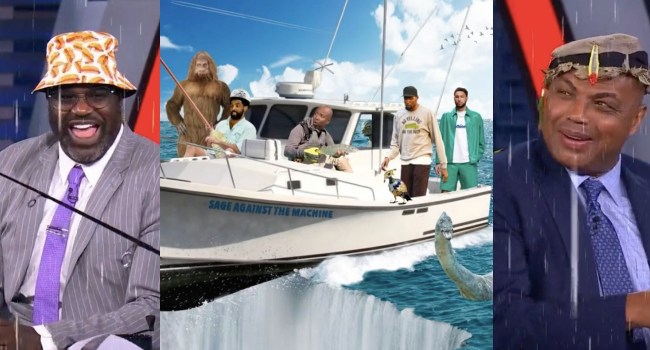 After being swept out of the first round of the playoffs by the Boston Celtics, Shaq, Charles Barkley, and the rest of the Inside the NBA crew did their traditional “Gone Fishin'” segment, where they basically spend two-and-a-half minutes laughing at a purposefully poorly made photoshop of the Nets on a boat. It’s this sort of stuff that has made Inside the NBA one of the most beloved sports shows in the history of American television, of course.

"That Sasquatch is big foot, fool." 😂

In addition to the “Gone Fishin'” segment and on a far more serious note, Chuck also discussed the issues the team will face going forward, such as their inability to overhaul the roster and having to fill it out with “a bunch of mediocre players”:

"Who's going to want to play on that team?"

RELATED: Shaq Can’t Keep It Together As Charles Barkley Explains What To Do When ‘A Guy Is Banging You’ (Video)

As Barkley points out, the team currently has no idea what to expect out of Ben Simmons, who the team received in exchange for James Harden in a trade with the Philadelphia 76ers. The former #1 overall pick did not play at all this season. Despite teasing that he would return for Monday night’s Game 4, Simmons ultimately felt “soreness” in his back and opted not to play in the game. This, according to Shaq and Chuck, was a “punk move.”

If the Nets can, against all odds, rehabilitate the career of Ben Simmons, then perhaps they have a chance at truly competing in the Eastern Conference. It will also certainly help to have mercurial point guard Kyrie Irving in the fold for the entire season.

Irving, according to his postgame comments, wants to be involved in “managing this franchise,” so perhaps his self-promotion to the position of general manager can help the Nets reach their potential and win the NBA title they’ve long been seeking.