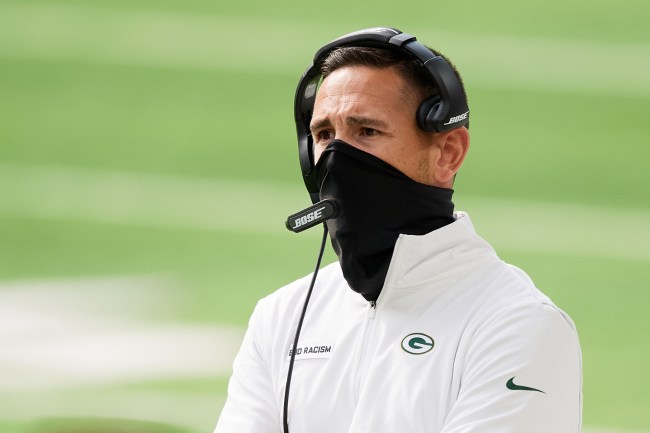 Herm Edwards: “You play to win the game.”

Matt LaFleur: “It is best to put the onus on Tom Brady to win the game. I have also just awoken from a 20 year coma.”

I was nine double IPAs deep yesterday, and even I was shocked by Matt LaFleur’s judgement to kick a field goal down 31-23 with two minutes left on the eight-yard line. The Packers head coach claimed the decision was fueled by his trust in his defense, the stoppage time from the two-minute warning, and three timeouts remaining.

Aaron Rodgers, who is now 1-4 in NFC championship games, claimed he understood the logic behind the call but “it wasn’t my decision” to forgo an opportunity to try to tie the game against a quarterback who’s preyed on this type of insecurity since George W.’s first term in office.

Hindsight’s always 20-20, but LaFleur set himself up to be the obvious scapegoat in a game that was very much within the Packers reach.

Stop me if you’ve heard this before, but Twitter was not kind to a man who made a devastating mistake.

I fell down, banged my head on the corner of a table, and hallucinated that Green Bay kicked a field goal rather than go for it on 4th and goal with one of the greatest quarterbacks in the history of the universe behind center. Unpausing the game now to see what really happened.

THANK YOU, MATT LAFLEUR, FOR HAVING SO LITTLE RESPECT FOR BRADY THAT YOU TOOK THE FIELD GOAL ON 4TH AND GOAL FROM THE 8 THINKING YOUR DEFENSE COULD GET RODGERS THE BALL BACK WITH JUST OVER 2 MINUTES LEFT.

LaFleur chose Mike Pettine over Aaron Rodgers with the Super Bowl on the line. That decision will live forever, no matter what LaFleur does in Green Bay.

Guessing Matt LaFleur stopped at every yellow light on the way home.

Time may prove me wrong, but I'm a firm believer in going down with your best on the field.

I feel better about Aaron Rodgers on 4th and 9 than I do the Packers defense getting a stop.

People are always like “you just live in your mom’s basement, they’re head coaches, they know what they’re doing” and then they kick a field goal down 8 with 2 minutes left on 4th and goal.

Last week, we celebrated the Chiefs throwing the ball on fourth down to help seal a win. They were ahead and their backup QB was in the game and they felt confident going for it.

Today, the Packers didn't feel confident going for it on 4th down, while losing, with Aaron Rodgers.

LaFleur: So what are we doin to get over the hump next year?

“Did you seriously kick a FG on 4th and goal down by 8 with two minutes left?”

Packer Fans: “Thank God we have Aaron Rodgers for this 4th down try.”

Matt LaFleur must've been waiting until he gets a quarterback better than Aaron Rodgers to go for it from the 8-yard line down 8 late in the fourth quarter of the NFC Championship Game.

coach we need 8 points. how many should we go for?

The good news, Mr. LaFleur, is that the internet will move onto something else in 48 hours. The bad news is that it will never forget.