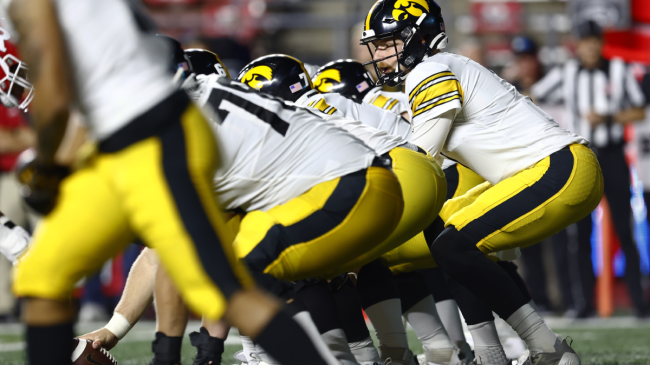 The Iowa Hawkeyes will welcome No. 4 Michigan to Kinnick Stadium this weekend as they look to get in the win column in conference play.

Through four games, Iowa is 3-1 with wins over South Dakota State, Nevada, and Rutgers. The loss came to archrival Iowa State, 10-7.

Now, despite the 3-1 mark, the Hawkeyes have been less than impressive over those first four matchups.

The offense, in particular, has been downright bad, totaling just 17 points per game against largely overmatched competition. Iowa failed to score a touchdown against FCS foe South Dakota State, and they struggled mightily in the loss to the Cyclones. There has been improvement over the last couple of weeks, but no one is expecting much from this group moving forward.

While the Hawkeyes won’t scare many teams on the schedule, there is one interesting statistic regarding Iowa’s play against top notch competition has Michigan fans on notice.

The Hawkeyes have seen recent success playing at home against top-flight opponents. In fact, in the last six meeting versus Top 5 foes in Kinnick Stadium, Iowa has won five outright with the lone loss coming by just two points.

Those wins have all come against Big Ten competition and include victories over Penn State, Michigan, Ohio State, and Michigan State.

The home atmosphere in Iowa City is said to be one of the best in college football. This mark certainly seems to prove that point. Many Michigan fans are treading lightly upon entering this conference matchup. Take a look at the immediate reaction below.

Interestingly enough, Michigan head coach Jim Harbaugh has never won in Kinnick Stadium as a player or coach, losing his last opportunity 14-13 after entering with the No. 2 squad in the country. Can he land his first win on Saturday, or will history repeat itself?

Jim Harbaugh has never won a game in Iowa City, not as a player or a coach. Further, I will be wearing my lucky gold t-shirt which is 3-0 this year. Go Hawks! https://t.co/7IUXP1kdfi

Check out a few more reactions from nervous Wolverine fans ahead of this weekend’s matchup.

This is a scary stat line https://t.co/ZwRloZkV8J

Can Michigan buck the trend this weekend or will another Top 5 team’s hopes come to die in Kinnick Stadium?