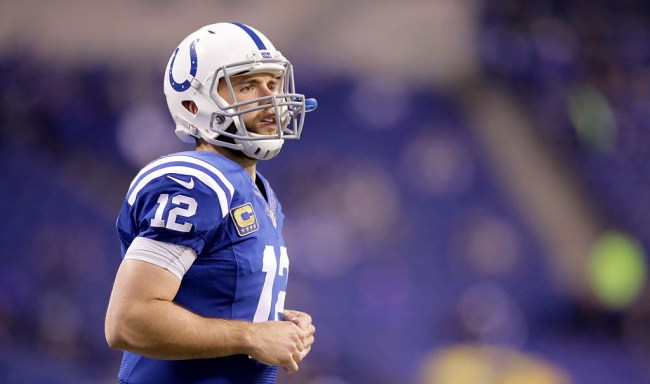 As any Indianapolis Colts fan will tell you, (or anyone who owns him in fantasy football) Andrew Luck’s mysterious inability to heal and return to the Colts’ starting lineup has been a real point of contention this NFL season.

Luck, who underwent shoulder surgery in the offseason to repair damage he suffered in 2015, was initially reported to be good to go for the start of the 2017 NFL season by Colts owner Jim Irsay way back on January 19th (before season tickets had been purchased).

Andrew recovering from successful outpatient surgery to fix right shoulder injury that had lingered since 2015. Will be ready for season!

Fast forward to October 3rd and Luck still hadn’t played a single snap in the regular season, but according to Colts coach Chuck Pagano on his radio show, “He’s making great progress.”

Since then, Luck has been officially place on injured reserve and is reportedly seeking treatment on his surgically repaired shoulder in Europe, according to ESPN.

Yet somehow, through all of this, Jim Irsay and other Colts officials have continuously claimed that Luck was going to play this season, making them ripe for a lawsuit from season ticket holders, reports Pro Football Talk…

As we now know, Luck won’t play in 2017. And so the question becomes whether Irsay was accidentally or deliberately inaccurate in January, when he made a promise that Luck “will be ready for season!” before fans had to decide whether to buy an expensive package of two preseason and eight regular-season game tickets that would allow them to enjoy the exploits of Andrew Luck.

Even without the Colts saying anything more, the circumstances reveal sufficient evidence to launch a class action on behalf of all season-ticket holders, on the basis that they were falsely induced to buy the tickets under the premise that Luck will play. Other things said by the Colts only strengthen that potential claim.

In a rather surprising move, Colts G.M. Chris Ballard gave an interview recently with Dan Dakich of 1070 The Fan, where he made the glaringly obvious false statement, “There’s not been one point where we’ve said or put a timeline on this.”

Dakich also claims that at one point in this process Luck sent a text to someone who showed it to a member of the media Dakich is familiar with that read, “I’m nowhere near ready. They’re putting me out here to sell tickets.”

Ballard’s response was that for “anybody to say that Andrew made that text or made that remark, I would say that’s a fabrication on their part.”

Whether Luck ever plays for the Colts again, or for that matter, any team in the NFL still remains to be seen.