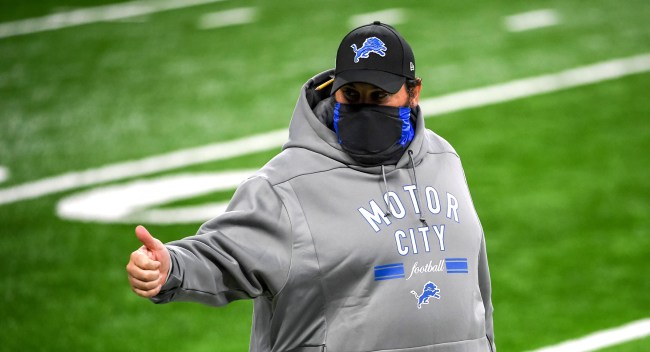 When Matt Patricia was fired after the Lions’ 41-25 drubbing at the hands of the Houston Texans, the only person in America who might have been surprised was… well, no one. No one was surprised.

Numerous former Lions players had gone on record bashing their one-time coach who struggled to a 13–29–1 (.314) record during his tenure with Detroit.

So pretty much everyone who is a fan of the Lions was very happy and not at all shocked to see him get the boot. Especially after Lions owner Sheila Ford Hamp was spotted looking like this during the game on Thanksgiving.

WE GO LIVE TO THE OWNER’S BOX! pic.twitter.com/RxNxJuoeW5

One Lions fan, however, Twitter user @EddyPLionsFan, was not on board with Patricia’s firing.

You act like Coach Patricia was the problem! If his players had listened to him we wouldn’t even have this conversation

As The Big Lead points out, Lions fan Eddy P almost exclusively has tweeted about almost nothing but Patricia this season.

Those weren’t all his players. General manager Bob Quinn had input as well as CEO Rod Wood. If they would’ve listened more to coach patricia you would’ve seen better results

Interestingly, all of faceless Eddy P’s tweets were posted at times either before the season began or after Patricia was fired.

Coach Patricia is a great coach I would love to see Twitter people try to manage all of the injuries he’s had to deal with, people forget how good the team looked before Matt had an unfortunate injury

I’d like to see some of the twitter people try to do coach Patricia’s job. There’s a reason he’s one of the NFL head coaches, fans just try to run him out of town like they do with everyone

Pretty crazy, all those coincidences, huh?

Coach Patricia has dealt with too many injuries. You have no idea how hard he works. Just let him get his guys in here and you’ll see.

Since Patricia got fired, Lions fan Eddy P has been all about defending the team’s now former coach, even providing some behind the scenes insight that he somehow acquired, from somewhere.

Lions would be better off moving on. Stanford is uncoachable.

Surprise! Coach Patricia was right. If the Lions organization and players listened to him then everything would be different

LOL. Coach Patricia accomplished more than you ever have or ever will. If the Lions organization had listened to him everything would be different.

Coach Patricia has a thing called respect. Maybe that reporter should learn some

So it this Matt Patricia’s burner Twitter account? If it isn’t, someone out there is doing an incredible job of pretending that it is. Either way, it’s hilarious. Just for different reasons.