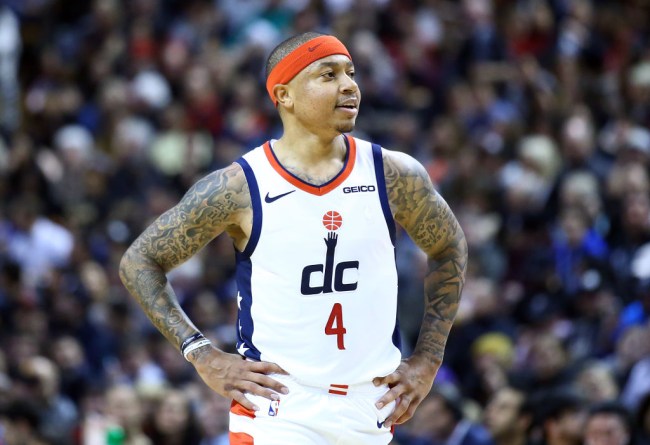 The internet is filled with fast food “hacks” involving some unconventional combinations of menu items most people would never think of, whether it’s throwing a hash brown in the middle of a McMuffin or asking a Chipotle employee to wrap your burrito in a quesadilla because life is short and global warming is probably going to kill us all anyway so we might as well have fun while it lasts.

However, for my money, there’s one fairly untraditional mashup that never fails to scratch an itch some people aren’t even aware they had until they try it: dipping french fries in a Frosty at Wendy’s.

Sure, it might sound a little unconventional, but I guarantee that once you experience this sweet and salty treat, you’ll wonder what took you so long to bring it into your life.

This may seem like an odd way to open an article you clicked on to learn more details about the suspension of an NBA player but I promise you it’s somewhat relevant, as the fans in attendance at Saturday’s contest between the Wizards and the 76ers in Philadelphia had the chance to score a complimentary Frosty as part of promotion that granted them a free one if one of Washington’s players missed two consecutive free throw attempts.

In the closing minutes of the game, Isaiah Thomas gave spectators some hope when he missed his first shot from the charity stripe but dashed their dreams when he made his second one—much to the chagrin of one guy in the stands who overreacted just a tad when he threw up a couple of middle fingers and started hurling swear words at the Wizards guard.

This apparently didn’t sit very well with Thomas, who opted to go into the stands to calmly confront the fan in question, and while we managed to avoid a repeat of the Malice at the Palace, he was still sent to the locker room for leaving the playing area.

Isaiah Thomas goes into the stands to confront fan pic.twitter.com/QrPHcTLnIq

After the game, Thomas addressed the situation and said the guy he approached apologized for his actions and told him he was simply frustrated he wouldn’t be leaving the arena with a coupon for a free Frosty.

Following the confrontation, the 76ers announced they had banned the fan (and his buddy) from Wells Fargo Center for a year in addition to taking away the remainder of his season tickets so it appeared everyone involved in the situation had been disciplined accordingly.

However, on Sunday, the NBA announced it was hitting Thomas with a two-game suspension for his actions, which seems patently absurd when you consider all he did was talk to the guy (league rules state players who enter the stands are automatically subject to punishment in the form of a suspension and/or a fine).

After hearing the news, Thomas issued a one-word response that made it clear he thought the punishment was a bit undeserved.