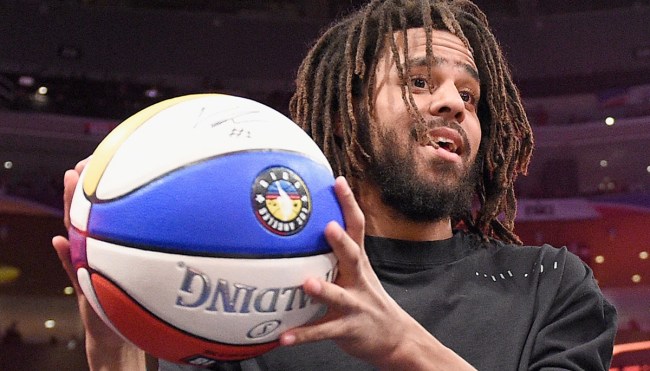 In 2020, J. Cole raised more than a few eyebrows when he asserted he had the requisite skills to earn a spot on an NBA roster. That ultimately (and somewhat predictably) resulted in the Pistons inviting the rapper to a tryout, but those specific hoop dreams have yet to pan out.

However, the man who once went platinum with no features did make his pro debut on a slightly less prestigious stage in 2021 when he signed a deal with the Rwanda Patriots BBC of the Basketball Africa League (which didn’t sit well with at least one of his opponents).

His time with the team came to a quick close following the three games where he posted a grand total of five points, three assists, and five rebounds, and it’s safe to say his overall performance left plenty to be desired.

Had to make a highlight reel to commemorate the end of J. Cole's legendary pro basketball career pic.twitter.com/dYOMMvfCT4

Based on how he fared during that stint, it’s fairly easy to understand why other teams weren’t immediately knocking down his door with contract offers. However, ESPN reports another squad has decided to give him a shot, as the Canadian Elite Basketball League announced J. Cole has become the newest member of Scarborough Shooting Stars on Thursday night.

If the signing was a publicity stunt, it’s safe to say it worked exactly as intended. After the news broke, fans flocked to scoop up tickets at the Shooting Stars arena, and even if you take the value of the Canadian dollar into consideration, the price of admission to enter the 2,000-seat venue to watch the 37-year-old play is absolutely bonkers.

who the actual fuck is pricing these Scarborough Shooting Stars tickets?? MLSE???? pic.twitter.com/ShpbHXqV77

Other people who attempted to score a discount by trying to purchase season tickets discovered they were far from the only person with the same idea.

@sss_cebl everyone thinking the same thing. Trying to get season tickets for the Scarborough Shooting Stars. #cebl #jcole pic.twitter.com/0GdiG27GUX

We’ll get the chance to see if J. Cole has managed to improve his game when the CEBL season kicks off on May 26th.