One Of J. Cole’s Opponents Called His Decision To Play Basketball In Africa ‘Disrespectful’ And Rick Ross Had Some Thoughts 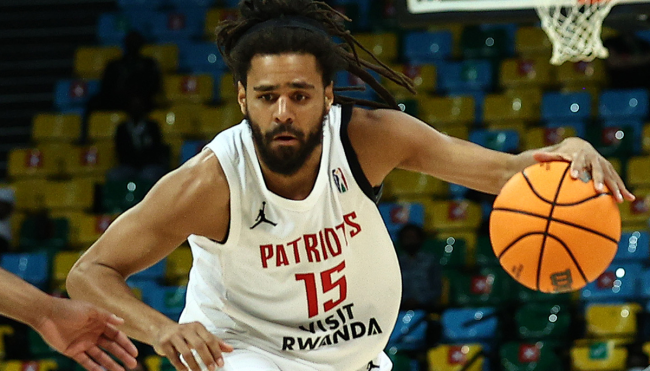 Last summer, J. Cole casually suggested he wouldn’t have much trouble pivoting from a career in hip-hop to one in the NBA shortly before he was predictably invited to attempt to earn a spot on the Detroit Pistons roster.

Those plans may not have panned out, but earlier this month, the rapper revealed he’d settled for a slightly less prestigious gig after deciding to take his talents to Rwanda to see how he’d fare in the Basketball Africa League. We got our first look at his skills last week, and while he may be known for going triple platinum with no features, he’s probably glad he surrounded himself with guys who’ve devoted the bulk of the last decade to honing their skills on the court as opposed to in the booth.

However, I’m sure they’re more than happy he’s linked up with the Rwanda Patriots BBC based on the perks that come with his presence.

.@JColeNC gifted his teammates and coaches some new gear 🙌

It’s safe to say one of his opponents does not feel the same way about the thinly-veiled publicity stunt, as former University of Maryland player and current AS Sale member Terrell Stoglin didn’t hold back while speaking with ESPN to give his take on the situation, saying:

“I think there’s a negative and a positive. The negative part of it is: I think he took someone’s job that deserves it.

I live in a basketball world. I don’t live in a fan world. I know a lot of guys that had their careers stopped by COVID and they’re still home working out and training for an opportunity like this. For a guy who has so much money and has another career to just come here and average, like, one point a game and still get glorified is very disrespectful to the game.

It’s disrespectful to the ones who sacrificed their whole lives for this.”

I would argue Stoglin makes a pretty valid point, but it would appear Rick Ross disagrees based on the response he posted on Instagram.

I get where Ricky Rozay is coming from, but when you consider Stoglin gets paid to beat the team J. Cole plays on, I’m pretty sure he could not care less about letting the rapper put up some easy buckets for the greater good.