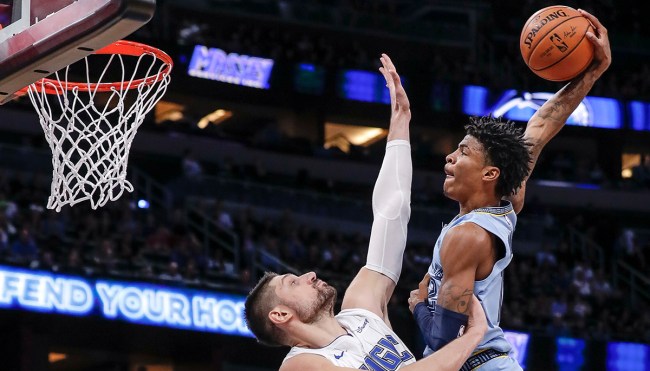 In 2020, the NBA found itself with a major controversy on its hands courtesy of Dwyane Wade, who violated the sanctity of the league’s hallowed Dunk Contest when he seemingly rigged the competition to hand the crown to Derrick Jones Jr. instead of the far more deserving Aaron Gordon.

Now, I can understand why anyone who wasn’t participating in the Dunk Contest or had some money riding on the results might think Wade’s blatant disrespect of the highlight of All-Star Weekend wasn’t a huge deal. However, it would appear that single act may have had some wide-reaching ramifications, as it could have cost us the chance to see Ja Morant take part in the festivities.

Ja Morant has only played in the NBA for a couple of seasons, but he’s already established himself as one of the most dominant dunkers in the league.

After all, we’re talking about the man who came this close to forcing Kevin Love to retire in the middle of a game after he almost managed to give him the same treatment Frédéric Weis received at the hands of Vince Carter at the Summer Olympics.

As a result, inviting Morant to showcase his skills at the Dunk Contest seems like a no-brainer—especially when you consider he said he’d hop over the giraffe that was named after him if he ever got the chance to compete.

Unfortunately, the Grizzlies guard shared some bad news while chatting with Bleacher Report‘s Taylor Rooks in an interview where he revealed what he’d need in order to vie for a Dunk Contest title: $1 million.

Unlike the baseball players who’ve experienced a significant dropoff in the second half of the season after screwing up their swing in the Home Run Derby, the guys who take to the court to rock the rim don’t really have to worry about the impact it will have on their game.

However, Morant says he has a couple of issues that will likely make him avoid the Dunk Contest. The high-flyer shared that he feels like participants don’t get the respect they deserve for what they’re able to pull off because of how many players routinely pull off wild jams in regular games, but he also threw some not-so-subtle shade at Wade and the other judges who have underwhelmed him with their scoring over the past couple of seasons.

When you consider Morant has made almost $20 million over the course of his first two seasons, he probably doesn’t need another million, but I can’t think of a better use of GoFundMe than this incredibly worthy cause.