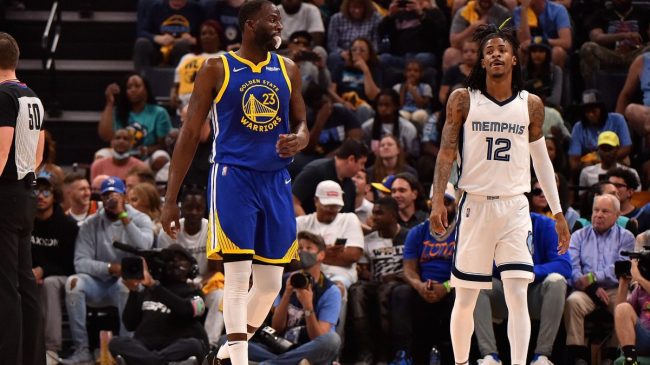 Ja Morant is keeping his beef with the Golden State Warriors going this offseason.

The Grizzlies and Warriors met in the postseason last year, putting on a highly entertaining performance in a back-and-forth series. The Warriors won that series 4-2 by winning each of the final two contests to seal the deal. Morant missed those last two matchups with an injury.

Despite being eliminated from the playoffs, Morant and the Grizzles weren’t far from the minds of Golden State players. After the Warriors won their fourth championship of the decade, Klay Thompson mentioned that an old tweet from the Grizzlies motivated him to play better in the postseason.

That obviously sparked a reaction from Ja and his Memphis teammates, as they said that they were still living rent free in the heads of Golden State players.

Ja explained his ‘real estate’ tweet in a recent interview with Bleacher Report’s Taylor Rooks, and it doesn’t seem like it’ll end this Warriors beef any time soon.

Morant was asked about that tweet in a recent podcast appearance. Ja’s answer likely won’t end his Warriors beef before the upcoming season.

"If I won a championship, I wouldn't think about no other team or what somebody said months ago" 👀

Ja Morant on his Warriors real estate tweet after the NBA Finals pic.twitter.com/hvnFlZSLmq

“Playing ‘Whip That Trick’ on their parade. Showing it in the club. Talking about Jaron. This and that.”

Morant says that if it was him winning that title, he wouldn’t have been worried about what another person said about him and his teammates. He’d enjoy the moment.

The Warriors, though, went out of their way to take shots at the Grizzlies following their win. These two teams should be back competing for a championship next season. The rivalry will be fun to watch moving forward.