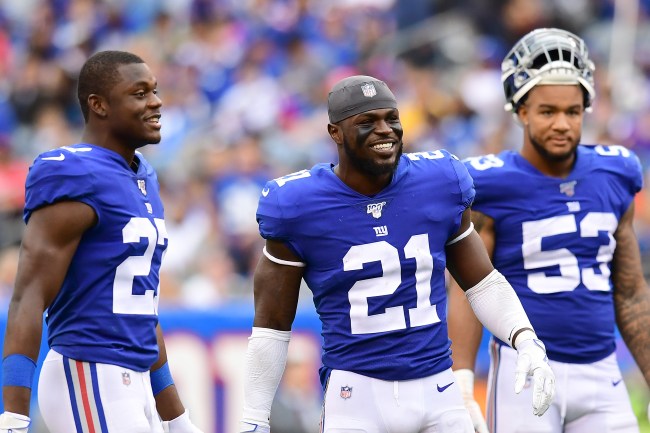 The G-Men ultimately surrendered to a 35-14 loss, but only trailed by one touchdown as late as nine minutes left in the fourth quarter. This is especially impressing seeing as New York newspapers were expecting an on-field homicide.

A huge bright spot for the Giants was its pestering defense, which hounded Tom Brady all night, despite the quarterback passing Peyton Manning for second on the NFL’s all-time passing list and completing 31 of 41 passes for 334 yards. The Giants picked Brady off, returned one of his fumbles for a touchdown, and never let him throw a touchdown pass.

While the missed opportunities piled up for the Giants offense, its defense had a couple they wish they could get back as well.

With the game was tied 14-14 in the second quarter, Giants defensive back Jabrill Peppers missed a key tackle on James White on 3rd-and-6 that led to a Patriots first down and eventually a Pats touchdown.

No. 21 Jabrill Peppers gets paid $10m to tackle pic.twitter.com/siHCheM7p8

After the game, the Michigan product, who played a ridiculous 82 snaps in the game, owned up to his mistake on Twitter.

Too many missed tackles as a team and myself personally. It won’t happen again Giants fans! Keep Riding with us!! #FANB

He then posted about how, although he doesn’t believe in moral victories, there’s a lot to build off from the Giants collective performance.

One Giants fan is still stewing over Peppers’ mistake.

As the Dealing With Trolls Handbook states, a professional athlete can either take the Kevin Durant route and engage in a petty war of words between strangers, or deal with in like a grown ass man. Peppers chose the latter.

Smh you’re absolutely right, cost us 7 pts. Can’t happen.. even though I think he dipped his uniform in something slippery 😤🤦🏿‍♂️ https://t.co/pvAQmRMgmW

The Dealing With Trolls Handbook also states that 100% of the time, the troll doesn’t really harbor any hate, he just wants a little recognition.

And we all leave happy!