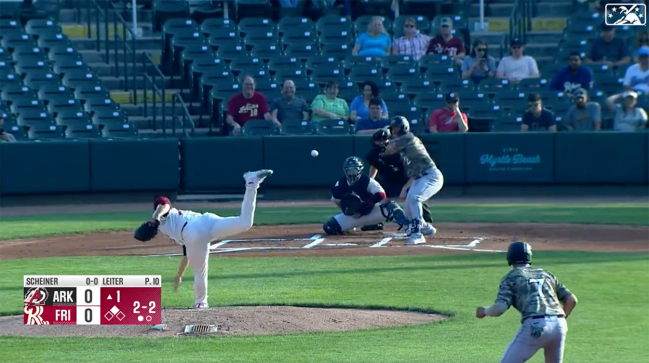 Jack Leiter is the top pitching prospect in baseball whether the rankings say so or not. The 22-year-old righty was one of the best pitchers to ever do it on the collegiate level and comes with a lot of hype.

After being drafted with the second overall pick in 2021, Leiter reported to spring training with the Texas Rangers and immediately started to light it up. He was pumping gas, striking out Ronald Acuña’s little brother with some nasty cheddar, and blowing minds with his wicked changeup.

Leiter was assigned to the Class AA level to begin his professional career and is currently a crucial piece in the rotation for the Frisco RoughRiders. Although he is only 1-2 in his first three starts, he boasts an ERA of 1.93 with 24 strikeouts and only nine walks in 18.2 innings pitched.

On Saturday night, Leiter made his best start of the season against the Arkansas Travelers. He allowed just two hits in six scoreless innings, struck out five batters and didn’t allow a walk.

Leiter’s best pitch of the evening was also the best pitch of his young career. During the top of the third inning, on a 2-2 pitch with two outs, he delivered a 98 mile per hour heater down and on the black.

The batter didn’t even try to swing. He stood in the box and watched Leiter blow strike three right by him.

After the dominant start on Saturday, Jack Leiter was thrilled to see that his hard work paid off.

He was never worried about his shaky start to the year because he has been there before.

“I felt like it happened the same way at Vanderbilt. The first couple starts, the feel wasn’t really there, and it ended up coming along as the season went,” Leiter said. “I just stayed confident that it would click — the fastball command, how my body’s feeling — and just trusting the defense. … They made some really nice plays for me.”

Behind Leiter, the defense was really strong.

What a sliding catch by Nash Knight!

The @Rangers prospect makes an incredible snag as Jack Leiter keeps rolling through five for @RidersBaseball.

Now, as Leiter looks toward the fourth start of his first year, he wants to keep things consistent.

“You just have to keep it as similar as you can to when you have a good outing,” Leiter said. “Obviously there’s some more things to work on after some outings, but there’s never a time to panic, no matter how good or bad. You shouldn’t overreact, as a starting pitcher especially. If you do, it’s a long week in between starts just overthinking everything. Good or bad, you just get back to where to were right in the center the next day and through that next week, you just work on what you need to work on and prepare for that next start.”

If Leiter can keep shoving like he did on Saturday, his fast track to The Bigs will be hard to slow down.