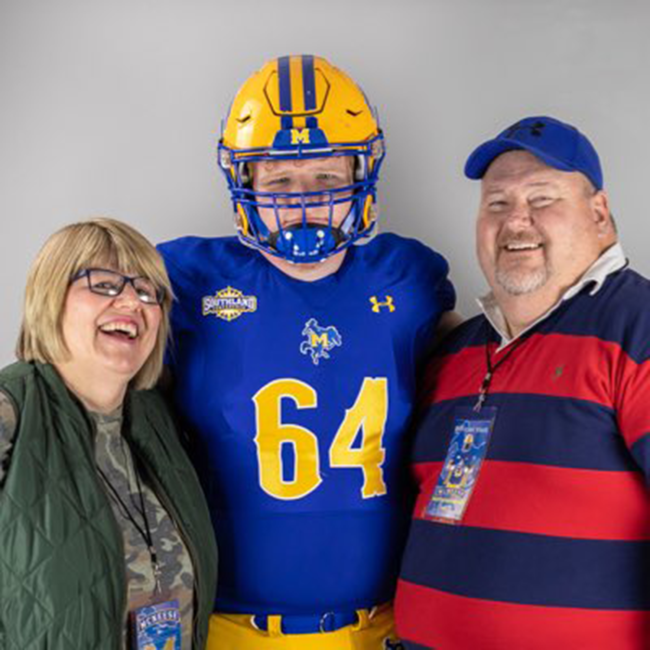 The 22-year-old posted a video on Thursday in which he rang the bell at his local hospital, signifying that he is cancer-free. It has been six months since he received his diagnosis, and after four months of chemotherapy and 15 radiation treatments, Zelezinski won.

And to make the goosebump-inducing moment even cooler, he shared that he isn’t done playing football. The McNeese State offensive lineman is set out to return to the gridiron.

Zelezinski knows that the road back won’t be easy. However, he says that it’s nothing that he can’t handle. His mindset is unstoppable.

After 4 months of Chemo and 15 Radiation treatments I can say I kicked cancers ass. It's been a tough 6 months but it stood no chance. I know coming back from this to play football won’t be easy, but it’s nothing I can’t handle. Thank you for all the support and prayers. pic.twitter.com/dGd9d4h21e

Zelezinski, who has yet to see the field for the Cowboys through his first two years, was a three-star recruit out of high school. At 6-foot-5, 274 pounds, he was the No. 8-ranked center and No. 12-ranked guard in the state of Texas, earned First-Team All-District honors, and was on the A-B Honor Roll.

Zelezinski will begin his journey back to the field with an entire nation behind him. There is not a single sane person on this planet who won’t be rooting for the Houston-native to get back to football.

The moment in which Zelezinski, with a quivering voice, reads the plaque on the wall and rings the bell, is so much bigger than sports. In that moment, Zelezinski is not just a football player. He is a survivor. He is a warrior. He is a champion.

McNeese State will get back to practicing for the fall in August. If and when Zelezinski joins his teammates, it will be emotional and well-deserved. Go Cowboys!