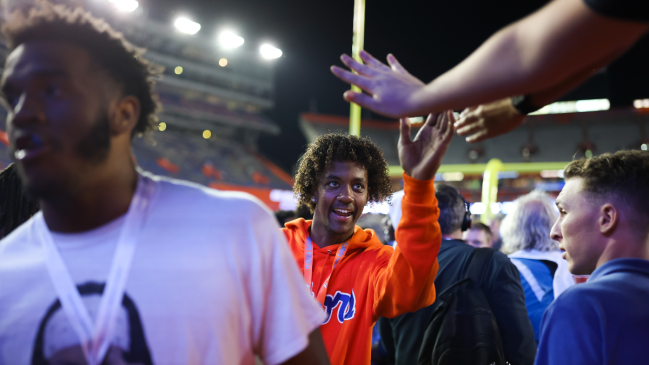 California product Jaden Rashada is one of the best high school quarterbacks in the country in the class of 2023.

Rashada, a 6-foot-4 gunslinger, is ranked as a five-star and the No. 29 overall prospect in the country by 247Sports.

His recruitment, meanwhile, is one for the history books and perhaps the best look yet at the constantly changing new world of NIL.

Rashada committed to the Miami Hurricanes over the Florida Gators in June and stories quickly followed about him signing an historic NIL deal with the Canes. Miami mega-booster John Ruiz shot down those rumors.

It appeared that was that for Rashada. But that didn’t last long. Sixth months later, Florida flipped Rashada’s commitment in a move that was all the recruiting world could talk about.

Rashada signed with the Gators in December before taking part in the Under Armour All-American Bowl. Only one problem, Rashada never showed up on campus in January when he was set to enroll.

G. Allen Taylor of The Athletic took a deep dive into whos, whys and hows the entire situation.

$13 Million Contract At The Head Of Jaden Rashada Controversy

According to Taylor, Rashada signed a deal with Florida NIL group “Gator Collective” on Nov. 10 worth $13 million. That’s one day prior to him flipping his commitment from the Canes.

Nov. 10: Rashada and the Gator Collective agree to terms on an NIL deal exceeding $13 million with Rojas and Grosso reportedly signing the contract. Such a massive pledge is thought to dramatically exceed the Gator Collective’s fundraising level, so the deal presumes assistance from Hathcock or other Gator Guard donors. After signing the contract, Rashada decommits from Miami and flips to Florida.

Nearly one month later, he says the deal fell apart.

Dec. 7: Rojas sends a termination letter regarding the $13 million contract, according to a program source close to the situation. There are conflicting accounts about why the deal crumbled and who pledged to pay what. Multiple conversations ensue between donors and athletic department members, including Castro-Walker and Stricklin. Some within the administration are only now getting up to speed on what was promised — the program aiming to keep these third-party NIL dealings at arm’s length. Yet these conversations ultimately focus on finding contingencies for keeping the class’ highest-profile recruit in the fold.

But two weeks after that, Rashada still signs with the Gators. Despite signing with Florida on Dec. 21, the highly touted quarterback is not among 16 early enrollees to report to campus on Jan. 10.

The story doesn’t end there.

Jan. 11: A program source with knowledge of the entanglement says Rashada won’t be enrolling at Florida. “There’s a lot of panic. It’s like stepping on an ant pile.” There’s also the potential for litigation, hinging upon whether the November contract is binding. The collectives, according to another program source with knowledge of the situation, are offering a lesser deal to Rashada — still above seven figures — to stay at Florida, with the caveat that he release everyone from all previous claims.

Technically, Jan. 13 is the last day for him to enroll. Though strings can always be pulled. But it’s clear Rashada’s recruitment is right up there with Eric Dickerson and Marcus Dupree as an all-timer.