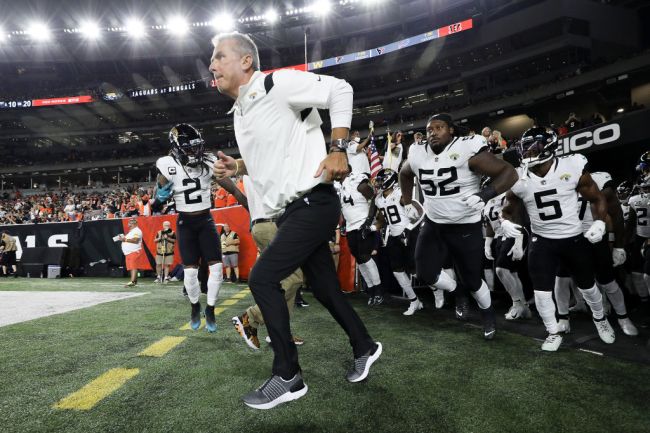 Jags players aren’t buying Urban Meyer’s apology/explanation over his lap dance video and that doesn’t bode well for his future with the team.

On Monday, Meyer told the media that he had apologized to the team after a video showed him getting real cozy with a woman at a bar who was clearly not his wife.

“I just apologized to the team and staff for being a distraction,“Just stupid and so I explained everything that happened and owned it. Just stupid. Should not have put myself in that kind of position.”

“I stayed to see the grandkids and we all went to the dinner that night,” he said. “There was a big group next to our restaurant and they wanted me to come over and take pictures, and I did. They were trying to pull me out on the dance floor, screwing around, and I should have left.”

NFL reporter Mike Silver has spoken to a Jags’ player about the Urban Meyer scandal and apparently, players don’t like the way their coach is handling the situation.

THREAD 1) The Urban Meyer situation in Jacksonville has reached a crisis point, especially in the locker room. One player told me, 'He has zero credibility in that stadium. He had very little to begin with.'

2) Players were particularly put off by the fact that Meyer canceled Monday's team meeting, as he dealt with the uproar over the videos of him and a young woman getting cozy in that Ohio bar. 'He even canceled the team meeting. He was too scared,' a player said.

According to the anonymous Jags player, players on the team laughed at Meyer’s explanation of the lap dance video.

3) Instead Meyer 'only apologized to position groups individually.' He portrayed the woman in the videos as a random person who was 'just there dancing.' Suffice it to say, his audience was highly skeptical.

4) Said one player: 'We looked at him like, WTF? Right when he left everyone started dying laughing. And he knew it.'

Considering the reactions from Jags’ players to the Meyer situation and the fact that team execs are currently reviewing Meyer’s “morals clause” in his contract it wouldn’t be surprising if the team has a new coach in a few weeks.