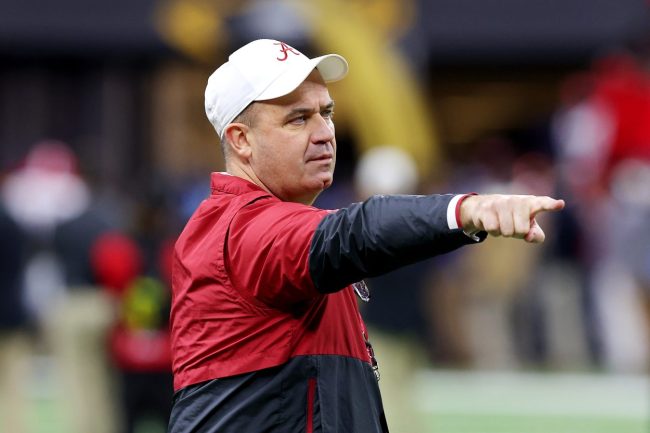 For better or for worse, it sounds like the Alabama Crimson Tide will return Bill O’Brien as offensive coordinator in 2022. Per a recent report from NFL Network’s Mike Garafolo, the Jaguars are doing something smart and have narrowed down their coaching search.

369 days ago, Jacksonville hired Urban Meyer as its next head coach. That experiment did not even make it through one full year.

Now, for the second time in two years, the Jags are looking for a new coach. However, they have had a difficult time finding candidates who are interested because of the organization’s recent incompetence and one very important staffer.

Per multiple reports, nobody wants to work for general manager Todd Baalke. His reputation around the league is poor and he is “seen as a political animal who is often locked in a power struggle.”

And yet, for some reason, team owner Shad Khan chose not to fire him along with Meyer. Thus, he is a part of the head coaching search.

As someone who has a large amount of influence over the next hire, Baalke reportedly had his sights set on former Texans head coach Bill O’Brien. Despite the terrible end to his tenure with Houston, the team went so far as to interview him last week.

It must not have gone well.

According to Garafolo, the team has since moved on. Jacksonville is actually doing something smart and ignoring Baalke’s wants.

“Bill O’Brien is one of the candidates for the Jaguars job,” he said. “He did interview. The Jaguars right now are in between phase one and phase two of their coaching search, meaning they had their first round of interviews. And now it’s like ‘okay, who are we going to bring back, who is going to be our finalist here?’ I’m just not getting the vibe that it’s going to be Bill O’Brien. I can’t say that conclusively, but having spoken to sources with some knowledge of the search and how this is going and who’s being sized-up as a potential favorite, I’m not getting that vibe.”

Could things change? Of course.

Would it be hilarious if after all of this, the Jaguars hired O’Brien? Absolutely.

Does it sound like that’s going to happen? No, it doesn’t.

You can find Garafolo’s full comments HERE, as he, Ian Rapoport and Andrew Siciliano tried not to laugh. But he seemed pretty certain that Baalke will not be getting his way.