The Jaguars Front Office Is Reportedly Torn On Who To Draft With The No. 1 Pick 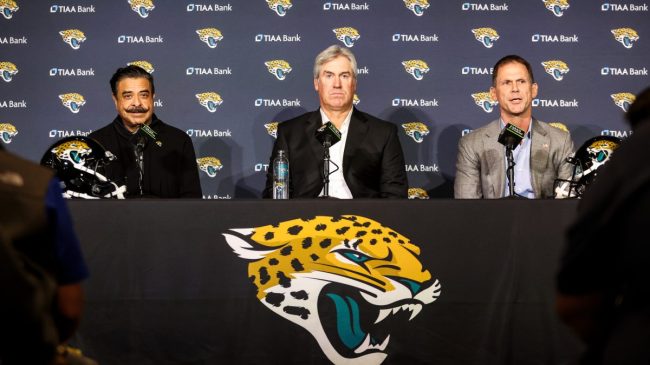 The Jacksonville Jaguars will be the first team on the clock in the upcoming NFL Draft.

After last year’s 3-14 finish, Jacksonville will be looking to add some talent as they hope to climb out of the cellar of the NFL standings. Management has made it clear that they’re no longer happy with being the league’s doormat.

The Jags have hired former Super Bowl winning head coach Doug Pederson to lead the team in 2022 following the disastrous tenure of Urban Meyer. The team also spent a ton of money in free agency, bringing in proven playmakers to provide young quarterback Trevor Lawrence with weapons on offense.

The only thing left to do now is to have a strong showing in the draft.

And they’ll have their pick of the litter with the No. 1 selection come Thursday.

Many have speculated about who the Jaguars will take when that time comes. There are some that believe they could add a player on the offensive line. Most, though, believe that the decision will come down to two pass rushers.

Michigan’s Aidan Hutchinson has been atop the draft boards for the entire offseason, but it seems as though Georgia defensive lineman Travon Walker is gaining some serious traction.

In fact, he’s become the new betting favorite to land at No. 1 according to Vegas oddsmakers.

While there has been a recent shift from Hutchinson to Walker, it appears as though the decision is far from being set in stone.

According to a report from Pro Football Network draft analyst Tony Pauline, there is a disagreement of who that top pick should be in the Jacksonville front office.

This could create a bit of a rift between management as draft day closes in. Will one opinion outweigh the other?

It will certainly be a storyline to follow this week. We should get our answer very soon, though, with the draft just three days away.