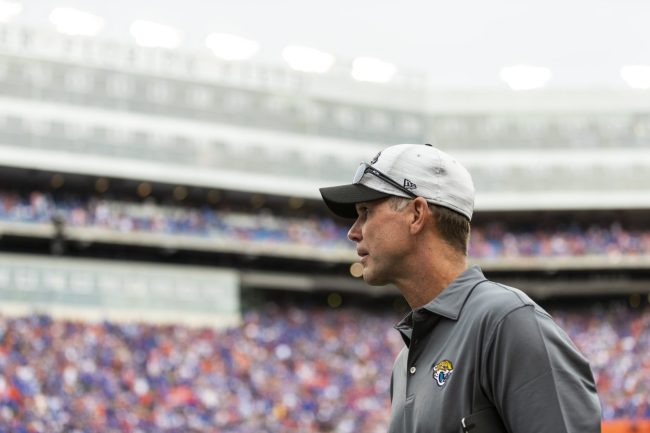 Things are not going well in Jacksonville. Not only are the Jaguars unable to win football games, but the organization itself is in shambles.

51 weeks ago, general manager Trent Baalke and owner Shad Khan decided to take a risk and hired Urban Meyer as head coach. It did not work out.

The Meyer era in Jacksonville lasted less than a year and included multiple scandals. Meanwhile, the team did not win.

After pulling the trigger on the failed experiment, the team is currently without a head coach for 2022 and beyond. Interim head coach Darrell Bevell was promoted from the offensive coordinator position but is not the guy long-term.

As a result, just as it was last year, the head coaching search is underway.

Even that is going poorly.

Per a recent report, the team cannot find anyone to interview or anyone who is interested because Baalke’s reputation around the league is so terrible. He is known to be an awful roster manager, does not have a successful history in the NFL Draft (in which the Jags could make history with back-to-back No. 1 overall picks) and he is seen as a “political animal who is often locked in a power struggle.” Yikes.

And yet, for some reason, Khan chose to retain Baalke for the current search.

The decision has set an uproar throughout the fanbase, which has planned a public display of detest for Baalke and Khan’s decision to keep him for Sunday. It is going to be hilarious.

However, the team is trying to bury the extremely conversation around Baalke and the team.

During a recent press conference, interim head coach Bevell was asked about the current climate. During the video that was released from the media session, Jacksonville bizarrely cut Bevell’s answer, instead having it jump to something about a birthday party.

So @APMarkLong asked Darrell Bevell about the fan movement protesting the retention of Trent Baalke and wouldn't ya know, the press conference video conveniently cuts right to him answering a question about his birthday. Weird! pic.twitter.com/TaGb4mZZOp

It’s all very strange, and alludes to just how terrible things are going at/in the league’s worst franchise.