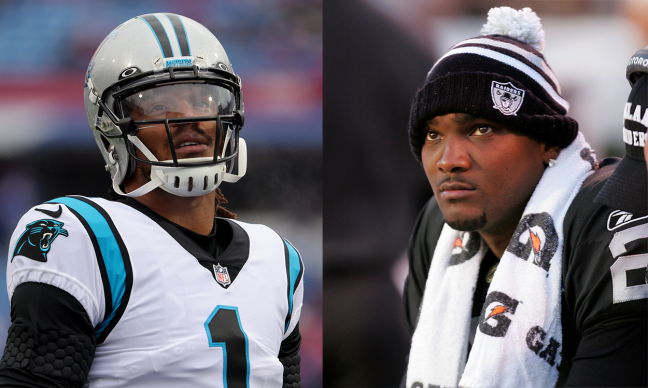 JaMarcus Russell does not have beef with Cam Newton, but he would like a word with the fellow No. 1 overall NFL Draft pick. The latter made comments in 2011 that the former has not forgotten.

Prior to the 2011 NFL Draft, there were a lot of analysts that said the Carolina Panthers should not use the first overall pick on Newton. The team did so anyway and the start of the former Heisman Trophy winner’s NFL career set records.

In turn, there was a lot of backlash toward the narrative that Carolina should not have picked Newton first because, in hindsight, he was the clear choice. Some analysts suggested that perhaps some of the criticism towards Newton was tainted with racism.

During an interview with ESPN the Magazine, Newton addressed that notion.

“I can’t sit up here and look at it like, ‘Oh man, my critics are racist,’” he said. “I blame JaMarcus Russell and, to some degree, Vince Young. If you have the opportunity to make that kind of money doing something you love to do, why would you screw it up? I’m trying to be a trail blazer. If Baylor’s Robert Griffin decides to come out, I want people to say, ‘He can be the next Cam Newton ‘ instead of ‘He’s going to be the next JaMarcus Russell.’”

JaMarcus Russell has not forgotten what Cam Newton said about him and did not appreciate that he had his name in his mouth.

During an appearance on The Pivot Podcast, Russell spoke about a wide variety of topics. It was a completely open, honest conversation in which he called out 2 Chainz for fabricating a story about his partying and bashed Tom Cable for how he acted as head coach.

In addition, Russell spoke with Ryan Clark, Channing Crowder, and Fred Taylor about Newton’s comments in 2011. There is no beef between the two, but Russell would like to talk with Newton about what he said.

“Cam Newton’s a good dude, good brother, but when he spoke my name, that’s when I lost (respect) for him. I never felt Cam Newton was a hell of a quarterback. He can run. He can throw, but it look like he hurt. When he throw, he don’t look fluid to me. But I ain’t get up there and said it on TV about Cam Newton. Right?

“JaMarcus Russell and Vince Young, guys like that, they’re the ones messed up the money. He ain’t said (expletive) about Sam Bradford. Bro, you’re going to get yours. And what you got — $100 million? Way more than I got, so what the (expletive) you mad for? You feel me? Cam Newton, I ain’t got no beef with you, but when I see you, we do need to talk.”

Newton, who is currently out of the league, has not responded to Russell’s comments. It will be interesting to see if he chooses to do so.

You can find Russell’s full conversation on The Pivot Podcast here: