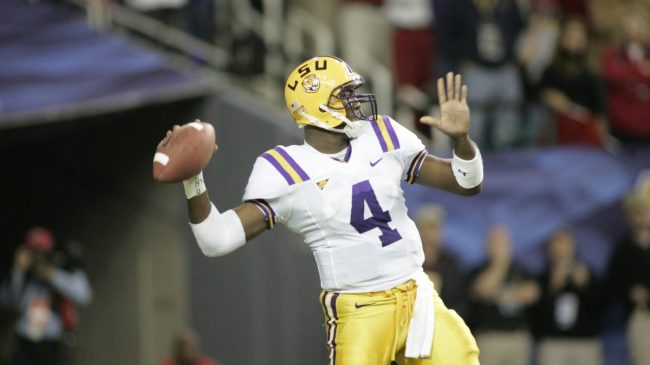 Nick Saban and Jimbo Fisher are feuding this offseason.

The bickering has ruled the headlines, becoming a huge story during the down time of college football. It all stems from comments made by Saban directed at Fisher’s top ranked recruiting cycle.

Saban claims that Texas A&M bought their entire class, handing out NIL deals to every prospect in order to land talent. It’s not the first time Fisher has been accused of buying those players, though he adamantly denies the allegations. Instead, he turned the spotlight back to Saban, who he calls a narcissist and a hypocrite.

“The narcissist in him doesn’t allow those things to happen, and it’s ridiculous when he’s not on top.”

It makes sense. After all, it was Alabama’s class that finished second behind A&M. Fisher also hinted that Saban’s track record in recruiting may not be as squeaky clean as he leads on.

Saban has since apologized for the claim, but the relationship appears to be severed.

In fact, they were once on the same team. Partners in crime. A leader and apprentice. And national champions.

Former No.1 overall pick JaMarcus Russell penned a letter to football fans on Wednesday speaking on his rise and fall in the NFL. The quarterback’s path to the league ran through Baton Rouge, where he was coached by both Fisher and Saban at LSU.

His OC? None other than Jimbo Fisher.

Both played major parts on JaMarcus Russell’s journey to the NFL, and he spoke about both coaches in this letter to readers.

With Saban, it was more about his recruitment. Russell was a freshman at LSU in 2004, the year before Saban bolted for Alabama.

“By 10th grade, I was getting so many letters, man – LSU, Florida State, Florida, Alabama, USC, everybody. I had a scholarship waiting from every college there was, for real. And the cool part about it was that I had Bobby Bowden, Nick Saban, all these big-time coaches coming down to Mobile.

While the Saban was more of a mythical-type figure for Russell, Fisher is someone he formed a bond with. Jimbo was his quarterbacks coach in Baton Rouge all three of his college seasons.

“I’ve been cussed out before. I got cussed out by Jimbo Fisher at LSU a thousand times, and I’d still run through a wall for that man, because Jimbo really took his time and coached me. I got to really get to know him, as a man.”

That’s a ringing endorsement for Fisher, and hey, maybe that ability to build relationships is what allowed A&M to land that top ranked recruiting class. Whatever the case, the Aggie head coach can chalk this one up as a win over his new archenemy.