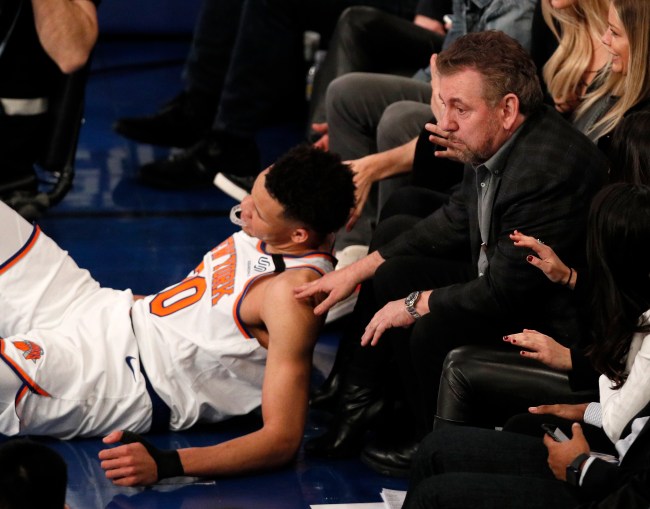 You would be hard-pressed to find a person more unanimously despised by basketball fans in New York City than Knicks owner James Dolan and that’s just me stating a fact, not an opinion. Stephen A. Smith once remarked that ‘everybody in the NBA would be happy’ if Dolan sold the Knicks. James Dolan has people out of the stadium (and banned them) for speaking out against the Knicks owner who continues to run one of the worst franchises in the NBA but due to their TV + MSG arrangements the teams remains the most valuable organization in basketball.

Rep. Max Rose is the incumbent congressman for Staten Island and he recently spoke out against James Dolan and the continued demise of the New York Knicks, a once-great organization that hasn’t had a winning season since 2012-2013. And they’ve only had THREE winning seasons since the 2000-2001 season.

The city of New York deserves better and that’s what Rep. Max Rose told TMZ when he was asked about the Knicks:

James Dolan cannot stand criticism. Fans who chant ‘sell the team’ get tossed from the arena. As you can imagine, Dolan didn’t take kindly to an NYC politician speaking out against him.

The Knicks owner has responded with a statement about how it’s disrespectful to New Yorkers to bring the Knicks up with regards to Congress and Dolan went a step further and is now sending personal fund-raising emails to his friends in an effort to boost the campaign of Rep. Max Rose’s opponent Nicole Malliotakis.

“It’s not like we’re unaware that fans are unhappy with the Knicks’ performance,” Dolan said.

It’s “very disrespectful to his own constituents that they would think that this is something that would help them make up their mind about who should represent them in Congress,” he said. (via NYP)

Dolan is delusional if he thinks there isn’t a single Knicks fan who doesn’t believe that he should sell the Knicks. He won’t, of course, but he should for the good of the city.

This all led up to the email James Dolan sent with a ‘personalized fundraising link’ where he asked friends to donate the max contribution of $2,800, according to Yahoo! Sports. The email reads:

“Max Rose thinks he can make our team and my ownership his political platform,” Dolan wrote in a personal email to friends last week that was obtained by The Post. “I need to let him know that we will not stand for this. The best way to do this is to help his opponent. He is in a tight race for the US Congress in Staten Island. … Please join me in helping Nicole defeat Max Rose for Congress.

“It will help send a strong message to all NY politicians that the Knicks will not be their political ticket to reelection. The most you can donate is $2,800,” Dolan added. “I cannot do this alone due to the limit on campaign contributions.” (via NYP)

Rep. Max Rose was asked a follow-up about Dolan now actively fundraising to boost his opponent’s campaign and if he is worried about the escalation of events and it sounds like the congressman isn’t the slightest bit worried about Dolan’s involvement: “Glad to see James Dolan is taking his talents to boost Nicole’s campaign. God knows he’s got the Midas touch,” the Congressman snarked, via the Post. “Never forget the Eddy Curry trade!”.

James Dolan was named as the ‘media sector’s highest-paid CEO of 2019’ by S&P Global after Dolan took in compensation valued at $54.1 million. He has a net worth that’s estimated at somewhere in the realm of $2 billion. It has to be infuriating for someone to be so wealthy and yet they’re unable to individually donate more than $2,800 to a candidate’s opponent out of a vendetta.

For more on this story, including which NBA owners are donating to which political parties (spoiler alert: they’re all donating everywhere), you can head on over to Yahoo! Sports for their more in-depth article.