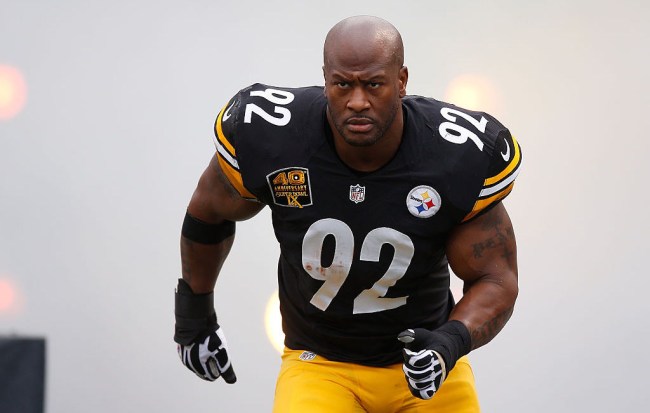 Back in the early days of YouTube, I devoted a sizeable chunk of time in my high school’s computer lab watching Kimbo Slice breaking other dude’s faces in random backyards. However, there is perhaps no video of his that managed to provide me with more enjoyment than the one where a guy agreed to throw on a set of pads and be on the receiving end of a hit from the former college linebacker in exchange for $100.

Players in the NFL subject themselves to similar punishment every time they take the field but are compensated slightly better than that guy was for putting their body on the line. With that said, I don’t know how much you’d have to pay me to subject myself to getting rocked by some of the extremely large men that make a living laying people out.

James Harrison has been retired since 2017 but he’s repeatedly shown off he’s still an absolute beast at the age of 42, so I can’t even fathom what it must’ve been like to get jacked up by him back in his prime.

Former wide receiver Mohamed Massaquoi, on the other hand, doesn’t have to use his imagination, as he was absolutely demolished by Harrison when the Browns faced off against the Steelers in 2010.

Harrison recently addressed the hit in question on the Going Deep podcast, where he implied Mike Tomlin approached him after the NFL fined him $75,000 and handed him an envelope full of cash.

People were quick to draw parallels between that handoff and the Bountygate scandal that rocked the Saints organization in 2012 after it was revealed Sean Payton and members of his coaching staff gave players financial incentives to injure their opponents.

Payton has already come out and said he doesn’t expect the NFL to investigate the Steelers like it did with the Saints, but on Friday, Harrison hopped on Instagram to express his incredulity over people equating the New Orleans coach with Tomlin, saying he was never instructed to try to hurt anyone while calling out the league for its hypocrisy in the process.

I sincerely doubt that his statement will put the “scandal” to rest but it’s hard to argue he doesn’t make a pretty good point.