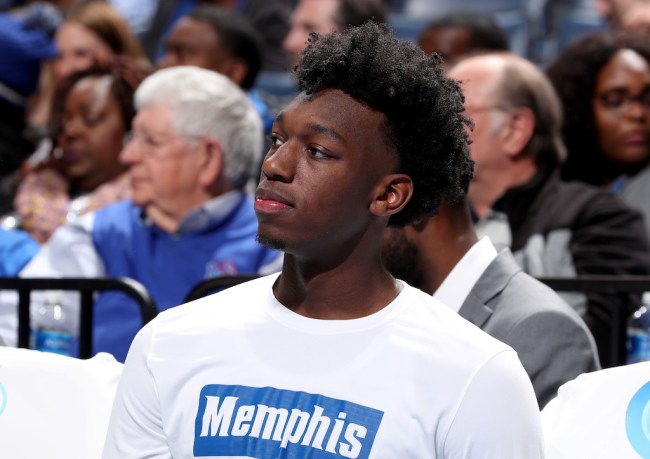 James Wiseman is expected to be one of the top players selected in this year’s NBA Draft, with the former blue chip recruit drawing comparisons to Chris Bosh for his length and athleticism. However, because the talented big man only played a handful of games for the Memphis Tigers last season after being ruled ineligible by the NCAA, he’s sort of the great unknown, with some front office execs wondering if he can make an immediate impact in the league.

Sure, Wiseman has been prepping for the NBA since he dropped his lawsuit against the NCAA last year after allegedly receiving money, but does that mean he’s really ready? After hearing a recent report from Brian Windhorst, I have my doubts — and it has nothing to do with the kid’s physical skills.

According to Windhorst, James Wiseman is already putting it out there that he has no interest in playing for the Minnesota Timberwolves (the team which holds the No. 1 overall pick). Wiseman’s reasoning? He doesn’t want to play alongside All-Star center Karl Anthony-Towns, a budding superstar who might be the most underrated big man in the league.

During his appearance on “The Scoop W/ Doggie”, here’s what Windy had to say.

“Wiseman does not want to come to Minnesota because Karl Towns is there,” said Windhorst. “From what I understand, Wiseman doesn’t even want to do anything with the Wolves.”

As the NBA Draft approaches, we continue to hear rumors about some of the top prospects. From LaMelo Ball reportedly bombing his interviews with teams to this report about James Wiseman, it could all be smoke and mirrors to trick teams. But if this report about Wiseman is the truth, man, talk about a moronic decision by the talented prospect.

Maybe it’s just me, but Wiseman comes across as entitled in his reported stance against playing for Timberwolves; especially if it’s because another, more seasoned big man is already there. Who the hell is this kid to say he doesn’t want to play with Karl Anthony-Towns — or any other All-Star — after playing a measly three games for Memphis as a freshman before leaving the school? It’s not like he’s a sure thing that a franchise can trust just yet.

More than that, why the hell wouldn’t James Wiseman want to join a Minnesota team with KAT and D’Angelo Russell already on it? Add the big man and, all of a sudden, the T-Wolves have a pretty tasty roster with a ton of young pieces to build around. It sure beats playing on a forgotten Charlotte Hornets team if picked third overall, or maybe being traded by the Golden State Warriors should the franchise choose him at No. 2.

As we all know, being a superstar isn’t all about physical skills, but mental and emotional skills as well. With plenty of top prospects playing the primadonna role over the years, it often ended badly for them. Hopefully that’s not the case with James Wiseman — especially before the NBA Draft has even started — but this kind of declaration always seems to rub front office execs the wrong way.

Wiseman’s got all the talent in the world and might be ready to physically play in the NBA. But he’s clearly not there yet emotionally if he’s postering for superstar status as a rookie, because he comes across poorly if Windhorst’s report is accurate.