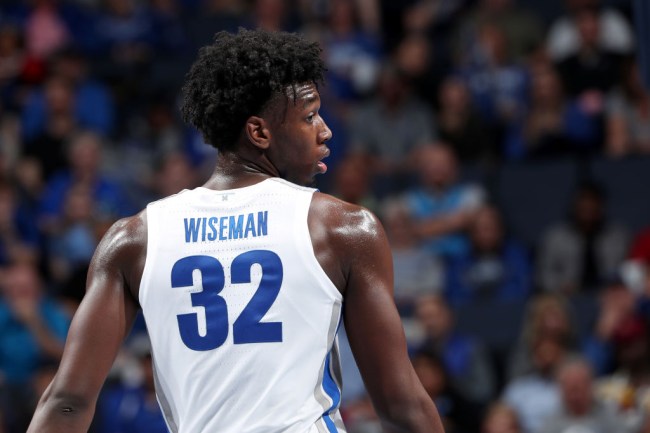 After a not so great situation unfolded between James Wiseman and the Memphis Tigers, the potential first-overall pick in the 2020 NBA Draft is leaving the university to prep for his professional career.

Potential No. 1 pick James Wiseman of Memphis has left the university, will sign with an agent and begin preparing for 2020 NBA draft.

Wiseman and his family allegedly accepted $11,500 from Memphis head coach Penny Hardaway back in 2017 to help with moving expenses from Nashville to Memphis. Hardaway wasn’t the head coach at Memphis at the time of the alleged 2017 ‘loan,’ but he was Wiseman’s AAU coach.

The NCAA initially ruled Wiseman ineligible, but the Tigers elected to play him on the same night that ruling came about as a Shelby County judge issued a restraining order allowing him to take the court for the Tigers.

Fast-forward a few days later and Wiseman and his attorneys elected to drop the lawsuit they had filed against the NCAA.

The NCAA acted upon Wiseman and the university yet again, in rather harsh fashion as per usual, suspending him until Jan. 12th making him miss 12 games. The suspension wasn’t the only piece of the confusing puzzle,  the NCAA said he must donate $11,500 to the charity of his choice after allegedly taking that same amount of money in 2017 for moving costs.

Given the unique situation, it comes as no surprise that Wiseman has elected to leave the university to prep for the upcoming draft on his own. The NCAA is breathing down both his and the university’s neck and leaving school to turn all focus on the draft is a justifiable move.

The 7-foot-1 freshman played in just three games for Memphis averaging 19.7 points, 10.3 rebounds and 3.0 blocks. His name will be called very early at the NBA Draft and it would be a shock to nobody to see him taken No. 1 overall.

Memphis has gotten along just fine without Wiseman this season as its lone loss of the season came against a strong Oregon squad. The Tigers sit at 9-1 on the year as conference play fast approaches.