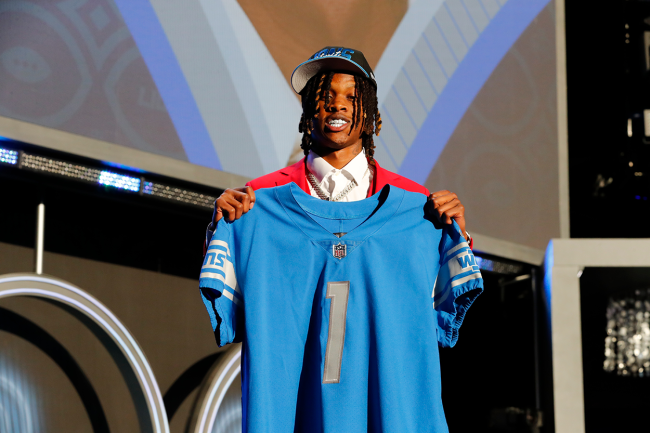 With the No. 11 overall pick in the 2022 NFL Draft, the Detroit Lions decided to add some help for quarterback Jared Goff and selected Jameson Williams. The first-team All-American will provide a huge boost to the offense once he is healthy, but it is unclear as to what number he will be wearing.

After catching 79 passes for 1,572 yards and 15 touchdowns last season, Williams tore his ACL in the College Football Playoff National Championship. Where that used to be a death sentence for careers in the past, modern science has allowed players to come back from such a significant knee injury sooner and stronger than ever.

Once he does return, Williams will presumably become the top target in Detroit. At 6-foot-1, 179 pounds, he can catch balls over the middle or burn a corner on a go route with his wicked speed.

Williams’ timeline for a return to the field is unclear, but it is not the only unknown. Whenever it is that Williams gets back on the gridiron, he will have to pick a jersey number.

And over the last week or so, Jameson Williams has sparked a lot of confusion about his jersey number decision.

At first, Williams was said to have announced No. 89 as his number on Instagram live.

Jameson Williams will be wearing #89 atleast for the preseason. I couldn’t imagine he stick with that number for long. #Lions

Jameson Williams will wear #89 with the Lions…

After initially leading people to believe that 89 will be his number, Williams reportedly dispelled those rumors — that he apparently started?

Yes, it’s that time of year where we have to speculate about a players number 😂

There have been rumors that former Alabama WR Jameson Williams will wear #89 for the Detroit Lions.

Jameson Williams’ response to the rumors on Instagram live:

In his first two years at Ohio State, Williams wore No. 6. That number is currently held by Detroit kicker Riley Patterson.

In his one year at Alabama, Williams wore No. 1. Lions defensive back Jeff Okudah, who was the No. 3 overall pick in the 2020 NFL Draft, announced that he was switching to that number for the 2022 season.

What number Williams will end up wearing is unclear. But it won’t be 89? Or will it? It’s all very confusing.