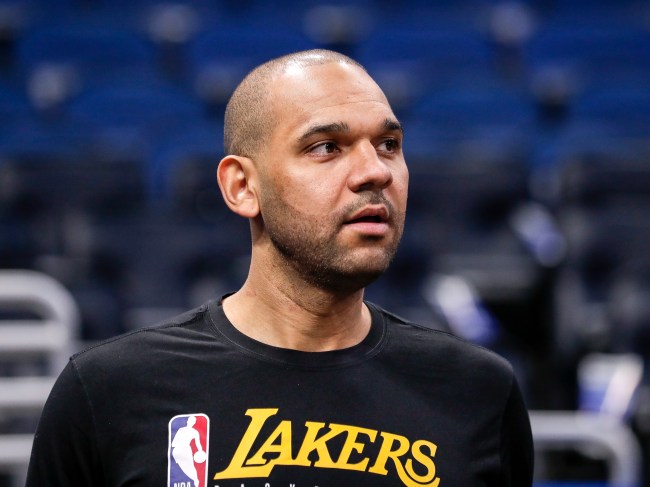 Jared Dudley has had a productive NBA career, albeit underwhelming. While the former Boston College standout was drafted No. 22 overall by the Charlotte Bobcats in the 2007 NBA Draft, the small forward hasn’t exactly lit it up or become an All-Star, but, hey, now in his 13th season in the league, it’s hard to say he hasn’t enjoyed success as a solid role player for a number of franchises.

With career averages of 7.6 points, 3.2 rebounds and 1.6 assists per game — along with veteran leadership — Jared Dudley definitely has value to whichever team he plays for. It’s one of the reasons why the Los Angeles Lakers signed him this past offseason, as he adds experience to a roster competing for a championship this year. And, while Dudley doesn’t get a whole lot of playing time, he’s only averaging 7.8 minutes per game this season, one shouldn’t forget that he’s a F’in pro basketball player.

Sure, Dudley might be picking up garbage time minutes for the Lakers, and has a chance to scoop his first NBA title this season by riding the coattails of the likes of LeBron James and Anthony Davis, but if you come at him about being a benchwarmer, he’ll shut you down HARD. Just look at what the guy said to some snarky Twitter user who tried disrespecting his name the other day.

Go be ACC player of the year in college, get drafted 1st rd, play 13 years in the league, shoot 40% from 3 for your career, be we’ll respected by your peers and you might have a chance young fella https://t.co/QKRloBmiJR

Good lord, guys, who knew Jared Dudley was so damn lethal. There are subtle burns, and then there’s Dudley completely body-slamming this poor fool, who thought that joking about Dudley’s role with the Lakers would be a wise idea. Little did he know the NBA player would come armed and ready with facts.

Anytime a pro athlete or celebrity can reply to a troll on Twitter in such witty fashion, the Internet takes notice, so it only makes sense that other people couldn’t help but love Dudley’s burn of the social media smartass. Here’s how some responded to the tweet below.

People don't seem to get than the 10th guy on a NBA roster is better than the best athlete they've ever seen anywhere. And a 13 year NBA career doesn't happen by accident.

That's a strong clap back …

Duds getting ready to end this mans whole career pic.twitter.com/3ZmsVlEISH

Good on Jared Dudley for reminding the guy that, yeah, he might be playing a measly 420 seconds per game for the Lakers this season, but he’s still making millions to play in the NBA. And, like former NBA player Channing Frye once said to any fans who thinks he sucked while in the league, I’m sure Dudley would happily show this troll that he could dominate him on the hardwood.