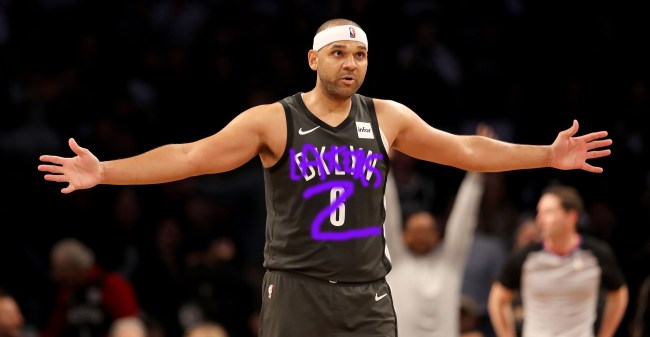 When he signed with the Los Angeles Lakers this offseason after stints with Charlotte, Phoenix, the Clippers, Milwaukee, Washington, Phoenix again, and Brooklyn, Jared Dudley was very hopeful that the team would be able to add Kawhi Leonard to the mix with LeBron James and Anthony Davis, re-creating the Miami Heat’s Big 3 “on steroids.”

Sadly for him, and Lakers fans everywhere, Leonard ended up signing with Los Angeles, but it was with the Clippers.

The signing of Anthony Davis, however, had already happened and James was ready to pass him the torch, handing over his #23 until the NBA put a kibosh on it because it would have cost Nike a ton of money if the change was made.

As a result, James decided to stick with his previous #6 with the Lakers, leaving Dudley to find a new number since that was the number he wore with the Nets last season and planned to use again next season with L.A.

Just talked to Nike! Heard about the Problem! I’ll just take 6 so fans don’t asked for their money back! 😂😂😂 https://t.co/TgFGc90iql

Need a new profile pic with number 6!!! @nikebasketball have no worries I got u! Problem solved! 😩😂

On Monday, Dudley announced he would be switching to #2.

Make up ur mind dude https://t.co/zAsDphAOqK

Then he made the big mistake of asking NBA Twitter to Photoshop him in his new #2 Lakers jersey. A very big mistake.

“Best picture of me in a number 2 gets two tickets to our 1st home pre season game!” Dudley tweeted.

Best picture of me in a number 2 gets two tickets to our 1st home pre season game!

Apparently, free tickets to a pre-season game wasn’t much incentive, because…

Here you go. #2 on your jersey pic.twitter.com/khTm2pak9l