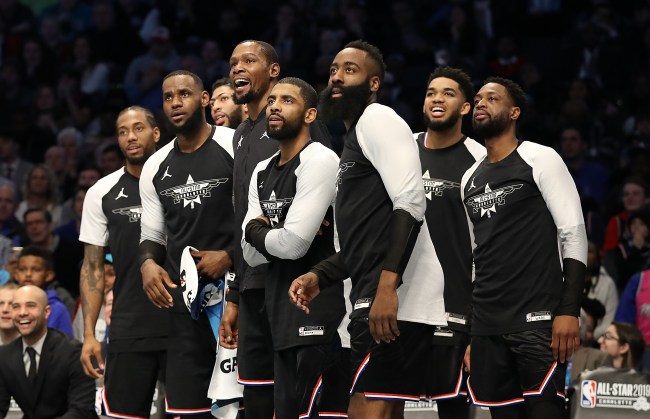 The Los Angeles Lakers were the most dysfunctional organization in sports just a month ago, but that seems to be a distant memory for most people. After a season of turmoil that included reports of internal fighting, drama in the locker room, injuries, bad play and rumors of an Anthony Davis trade that tore apart the young players, the iconic franchise appears to be on the fast track to stability all of a sudden — funny how finally acquiring Davis seemed to make the team a premier destination.

While the Lakers still have plenty of questions to be answered throughout the offseason, they’ve already landed one big fish, and, according to reports, are among the three teams who superstar Kawhi Leonard is considering. If the two-time NBA Finals MVP ends up with the Lakers, it’s pretty much game over, as the team would boast, arguably, three of the top five players in the league, pairing Leonard and Davis with LeBron James. The Lakers could start me at point guard and they’d win 55 games, so the rest of the league should be nervous about the real possibility of this happening.

One person who would happily welcome Kawhi to the Lakers? Recently signed Jared Dudley, who is one of the players the team acquired to fill out some vacant roster spots.

Talking to ESPN’s Adrian Wojnarowski on “The Woj Pod,” Dudley gushed about the potential that the Los Angeles Lakers could have with Leonard, going on to say that the star-studded trio would instantly be in the conversation as the best Big 3 in NBA history. Take a look at what Dudley had to say below.

“It compares to the Heat, but a little bit more on steroids. And the reason why I say that is because you arguably have three of the top five best players. I think that Wade and ‘Bron were considered that, I think Bosh was a little bit (outside of that)… AD, a year ago you could’ve argued him as being a top two or three best player in the league. Kawhi Leonard this year, taking his team to winning a championship. LeBron, his accolades speak for themselves.

“The difference with these other super teams and the way they’ve happened over the years is that Miami in a way was kind of cool, because it was three guys coming together in different situations. Even though they were hated early, then they were beloved. The Golden State superteam, that team was already a superteam, but they were a superteam organically, and then you add Kevin Durant, the cheat code on that one and then they became impossible.

“If the Lakers get Kawhi, then yes, you’re right there, you have all the talent. But it’s different because I’m signed for the minimum. You’re going to have minimum guys, you’re going to have to have key veterans step up in big moments and it’s not just gonna be easy if you get someone like that. So I look at it as a possibility that I think is good for the league. When it comes to the revenue, you need the Lakers and Knicks good. Obviously the Knicks couldn’t get it done, and we’ll see what Kawhi decides, man, but it’s better for the league.”

Does it sound like Jared Dudley’s just a little bit excited about being a member of the Los Angeles Lakers? Because it sure seems like he knows he made the right decision — even if it was on a minimum contract — which could lead to being part of one of the best teams in NBA history.

Dudley’s final point saying “it’s better for the league” for Kawhi Leonard to join the Lakers is questionable, because, for the first time in a long time, the NBA is wide open, with no clear-cut favorites like we’ve seen over the past few seasons. If the Purple & Gold add a superstar like Kawhi, that would instantly change, and they’d become the villains of the league in many fans’ eyes. But, man, it sure would be fun to see.

There are numerous reports out there linking Kawhi Leonard to the Los Angeles Lakers, and, whether you want it to happen or not, it would be must-see TV every night, with James, Davis and Leonard all capable of going off for 40.