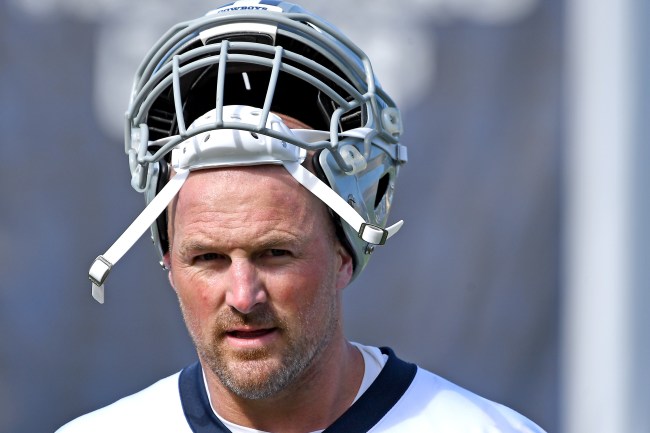 Jason Witten knows a thing or two about missing the grind of playing in the NFL. As we all know, the current Dallas Cowboys tight end lasted just one season in the broadcast booth — where he got pummeled for being, well, less than stellar — before shockingly announcing that he was going to return to the league. Even as Witten enters his 16th season in the league at age 37, the 11-time Pro Bowler couldn’t help but get back to the gridiron.

It’s that passion and competitiveness that Jason Witten thinks will hit recently retired tight end Rob Gronkowski, too, who surprised everyone by leaving the game before the age of 30 earlier this year. According to Witten, Gronk knows he can still play and perform at a high level, and the Cowboys tight end thinks that that competitiveness is what will lead the three-time Super Bowl champ back to the NFL sooner rather than later.

During a recent interview with Sports Illustrated‘s Allbert Breer, here’s what Jason Witten had to say about a possible return to the league by Gronk.

“What I do know about him is he’s the ultimate competitor, he loves football, so it’s going to be hard,” Witten told Sports Illustrated’s Albert Breer. “It’s hard to fill that void, knowing you can still do it.”

Added Witten: “Look, this is a young man’s game, and father time catches up with all of us. But while you can still do it, and he certainly can, he’s going to have to find things that fill that. … A lot of guys I’ve seen in my career that played at a high level and were done, they moved on, never thought another day about it. I know he’s got a lot of opportunities, but I’m sure he’ll miss it, because he’s the ultimate competitor.”

Witten brings up a good point here, because, yes, Rob Gronkowski knows that he can still dominate — it’s just a matter of his body and mind holding up. In fact, during an interview this morning, Gronk talked about his decision to retire, and didn’t exactly slam the door shut about coming back at some point.

“I want to be clear to my fans. I needed to recover. I was not in a good place. Football was bringing me down, and I didn’t like it. I was losing that joy in life,” Gronkowski said, fighting back tears.

Gronkowski’s remarks came at an announcement that he will be an advocate for players to be allowed to use CBD products for pain relief. He left the door open to possibly un-retire, saying, “physically, I could play right now” but added he is not there mentally.

Gronkowski detailed how he sustained a quad injury in Super Bowl LIII, and he knew that he was retiring after that.

“I got done with the game and I could barely walk,” he said. “I slept five minutes that night. I couldn’t even think. I was in tears in my bed after a Super Bowl victory. It didn’t make that much sense to me. And then, for four weeks, I couldn’t even sleep for more than 20 minutes a night. I was like, ‘Damn, this sucks.’ It didn’t feel good.

“It was one of the biggest, deepest thigh bruises I’ve ever gotten,” he added, noting it led to significant internal bleeding.

So, while Jason Witten took just one year off before his return to the NFL, should Rob Gronkowski realize he’s still got the itch to play — and his body and mind get him to a better spot — we might just see the bullish tight end come out of retirement, too. Only time will tell, but that competitive itch will definitely hit Gronk at some point, it does will every all-time great.