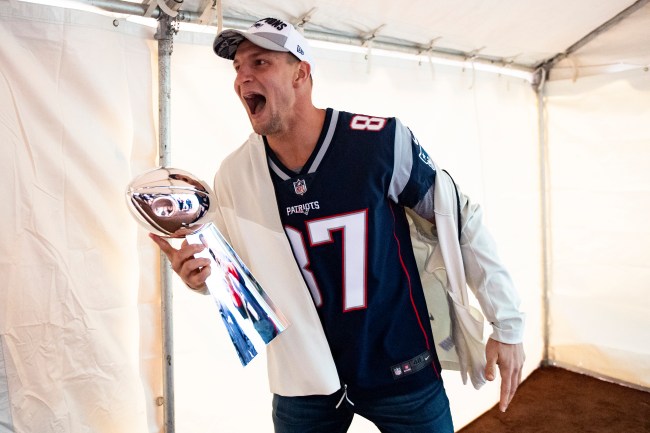 Rob Gronkowski calling it quits at the ripe “old” age of 29 earlier this year may have shocked some NFL fans, but over the last few years, there had been rumors of the former New England Patriots tight end retiring for a number of different reasons — with most of them relating to some of the serious injuries he suffered, which included lower leg injuries and concussions. And while the NFL won’t be nearly as entertaining without Gronk being part of it next season, fans should commend the guy for walking away on his own power, rather than being dragged off on a stretcher after numerous big hits.

Although there are some rumors out there that Rob Gronkowski could return at some point during the regular season — with some sources saying it’s a “40 percent” chance that he returns once the season starts — Mike Florio of Pro Football Talk weighed in on why Gronkowski may not ever return to the gridiron, which is the same reason why the bullish tight end retired in the first place. Take a look below at what Florio told WEEI radio in Boston.

“Well I remember back in the days preceding Super Bowl LII in Minneapolis, there was a rumor making the rounds that Gronkowski would retire after that game, presumably if the Patriots won,” Florio said. “And remember, he was asked the question, ‘any truth to the rumor that you may retire?’ He said, ‘I don’t know how you heard about that,’ so there was a ‘that’ to be heard about. My information was that his family had really been working on him to walk away, primarily because of his injury history, specifically the concussions. Remember, he got blown up in the AFC Championship Game, I think it was by Barry Church, and that was causing parents, brothers, etc. to push him to walk, and he ultimately didn’t.

“I think if they had won the Super Bowl, we would have done this whole thing last year, the speculation ‘will he be back for 2018 or won’t he.’ He would have retired then and we would have spent the offseason wondering how long it would stick. Now here we are, he finally walked away with that Super Bowl trophy in hand, walking off into the sunset like Jerome Bettis, Michael Strahan, John Elway. So now the question becomes is he going to decide, ‘Hey, I still want to do this.’ I think he still enjoys playing, I don’t think he enjoys all of the other stuff, but I think he enjoys playing and I think he’s going to miss playing.

“And the one key thing that we reported (Tuesday) and the thing that really caught my eye, the notion that a direct appeal from Tom Brady could be the thing that ultimately makes the difference for Gronk.”

When you consider that Rob Gronkowski took a beating during his playing career, it’s understandable that he walked away when he did — after all, the guy was, seemingly, superhuman, refusing to go down with just one hit. But all those hits took a beating on Gronk, and, thankfully, his family weighed in and were able to influence him. Now the question is if he actually stays retired or not, because a call from Tom Brady during the regular season could be enticing, so we’ll have to see how all this unfolds.