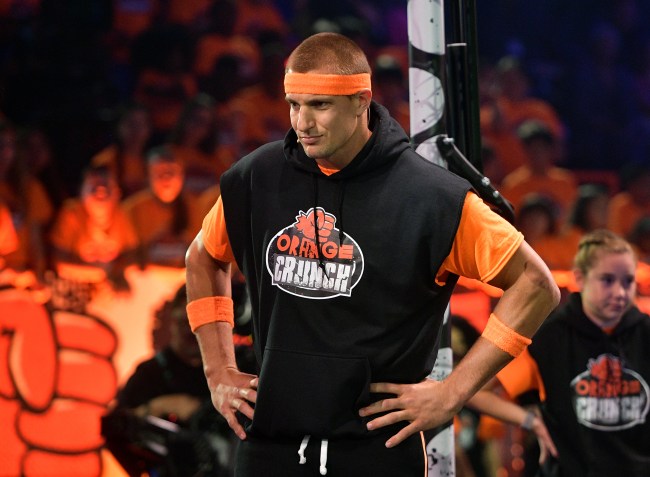 Rob Gronkowski sure looks like he’s enjoying retirement right now. Arguably the greatest tight end in NFL history, the former New England Patriots superstar called it quits from the league at the ripe old age of 29, giving him lots of free time to do pretty much whatever the hell he wants to. And because Gronk reportedly didn’t spend much of his actual playing salary — which was about $54 million — and has been living of endorsement money, he has the world at his fingertips.

While Rob Gronkowski has been jet-setting the globe, losing a ton of weight and taking part in a bunch of random events to show how much fun he likes to have, there’s still a small glimmer of hope that he could return to the NFL at some point. In fact, even with the, seemingly, ideal life that he’s enjoying as a newly retired person, there’s a lot of chatter that he’ll return to the gridiron at some point.

Although Gronk and others have shot down the notion that a return is possible, Mike Florio of Pro Football Talk has heard differently, claiming that a source close to Gronkowski says there’s a “40 percent” chance that the bullish tight end returns. Here’s what Florio had to report on the topic in a recent article while referencing the source, as well as the reasons why Rob Gronkowski would consider an NFL return.

When football season starts, Gronk may feel differently about his decision to walk away. But will he actually come back? A source close to Gronkowski pegs his potential for a first annual unretirement at 40 percent.

For now, Gronk isn’t thinking about football. He’s enjoying his life, he doesn’t need the money, and he’s having a blast. The question becomes whether Gronkowski misses his teammates and/or the games after August becomes September. While he won’t miss dealing with training camp and the preseason, he could miss the game once they start playing games that count.

And here’s a factor that needs to be considered: If quarterback Tom Brady makes a direct appeal to Gronk, that could be the difference maker.

It’s also believed that coach Bill Belichick, who has declined to discuss the hypothetical possibility that Gronkowski will return, will not be an impediment to an unretirement. Although Belichick easily could take the position that he doesn’t want to create a precedent that encourages veterans to retire through the parts of the calendar that they don’t like and then return for the good stuff, Belichick has been very supportive of Gronkowski, we’re told.

The fact that Gronkowski could help the Patriots get a record-setting seventh Lombardi Trophy makes the question of whether he’ll come back even more significant.

Florio lays out pretty good reasons as to why Rob Gronkowski might make a return. As we’ve seen with other players in the past, namely Brett Favre, Gronk may not miss the year-round training and schedule that the NFL demands — like OTAs, training camp, preseason, etc. It’s a grind, and not one that he probably ever looked forward to. But as the football season kicks off and he’s got nothing to do during weekends but to sit around and watch on TV, there might be an itch that he needs to scratch, which could lead to a comeback after the first month or so.

Then there’s this little tidbit, which comes directly from Rob Gronkowski’s mouth during a recent interview on The Rich Eisen Show about how things may chance once games start, per 247 Sports:

“There’s definitely going to be times when you miss it and everything,” Gronk told Eisen. “I would always say that it’s still the offseason right now. I mean I can’t really say how I’m going to feel about it when the games start rolling around and everything. You know, I just felt like it was time. I feel really good right now and it was just definitely something I felt like it was the right time and the right thing to do. To have that load off your back, I mean I’ve been playing football for 15 years straight in a row of that grind. Just relaxing right now feels good.”

Plus, let’s not forget that if Brady, the GOAT, gets any feeling that Gronk is even considering a return to the field, he’ll pick up the phone as fast as he can and, presumably, could be pretty convincing. For now, however, football fans only have some unnamed source’s claim that there’s a “40 percent” chance of a comeback, which is much better than a zero percent chance, so stay tuned.