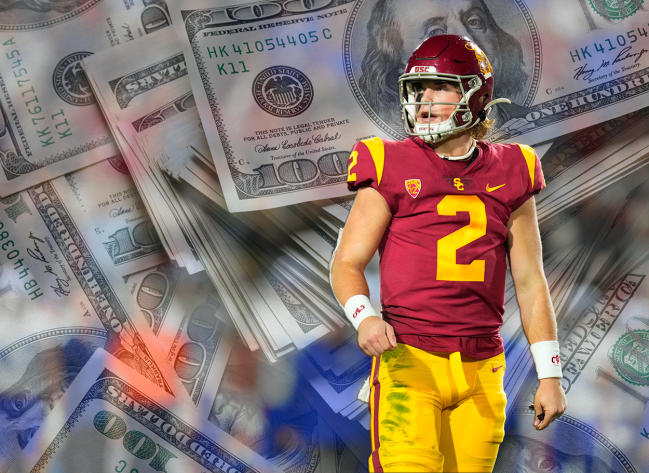 Former USC quarterback Jaxson Dart entered the transfer portal earlier this year and has grabbed headlines nationwide. The 18-year-old Utah-native will turn 19 in March and is set to celebrate his birthday at a new school.

Among the teams that reportedly reached out to Dart were BYU, Ole Miss and Oklahoma, but his decision appears to be down to the Rebels and the Sooners. Most people close to the situation believe that he and former teammate Michael Trigg are going to join Lane Kiffin in Mississippi, but nobody quite understands the hold up.

Regardless of where he ends up, he is poised to cash-in. Back in July, the NCAA implemented new rules that allowed college athletes to profit from their names, images and likenesses.

What that means is that a player can now be compensated for their services if they were to, say, promote a restaurant on social media or make an paid media appearance. NIL has caused college sports to become something of the Wild West, but the athletes who generate millions of dollars in revenue for their schools are finally able to see some — indirect — return.

It’s a great thing for the players, and therefore, college sports.

Dart, no matter where he ends up, is going to be worth a lot of money.

In terms of Dart, his valuation skyrocketed after visiting Oklahoma and Ole Miss, according to On3.

Now, after posting pictures with Lane Kiffin and his Aston Martin, as well as some drip from his visit with the Sooners, he is valued by On3 at $93,000. That is a 57% increase from when he first hit the transfer portal.

Once Dart makes his commitment official, as soon as this weekend, that number is sure to jump as either the Ole Miss or Oklahoma fanbase floods his social media. To see more of On3’s valuation database, click here.