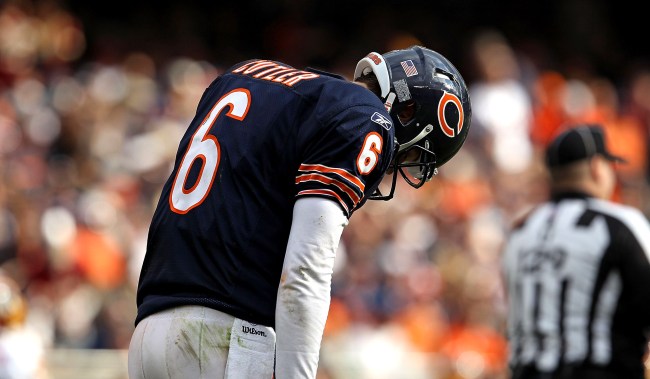 Chicago Bears quarterback Mitchell Trubisky had a rough season in 2019.

Despite having better stats than Tom Brady during the final 12 weeks of the season, Trubisky took the brunt of the blame for the Bears falling from 12-4 down to 8-8 and missing the playoffs.

It also didn’t help that Deshaun Watson’s pre-draft comments about Trubisky came back to haunt Chicago Bears fans, or that Patrick Mahomes trolled the Bears for drafting Trubisky ahead of him after scoring a TD in late December.

However, if there is one person who can relate to being a disappointing and unpopular quarterback in the city of Chicago, it would be none other than reality TV star Jay Cutler.

During an appearance on the Pardon My Take podcast this week, Cutler was asked what advice he would give to Mitchell Trubisky.

In true Jay Cutler fashion, he did not disappoint.

“Don’t read anything,” Cutler responded. “You watch some of his press conferences and you can tell it really bothers him sometimes. The media thrives when they have a season like they did versus going 13-3… Go underground here, bud.”

Bet Jay wishes that he could “go underground” at various points like, say, these days as rumors have been swirling about him having an affair with his wife Kristin Cavallari’s former best friend.

Cutler continued, “I think or a young guy like him, being in Chicago, it’s a tough town. Expectations were huge, so you watch some of his press conferences and stuff and you could tell it really bothered him sometimes, I think. And whether that affects him, I don’t know how it affects him. It has to somehow. But, the more he can get away from all that stuff, the better for him going forward.”

He wasn’t done with the advice, however, “I wouldn’t go online and find this stuff out, but their PR guy before a press conference and it’s going to be like, ‘Alright, what do I need to know?'”

When asked if there were any writers he hated, Cutler said he could fill a notebook.

Check out the entire interview below.