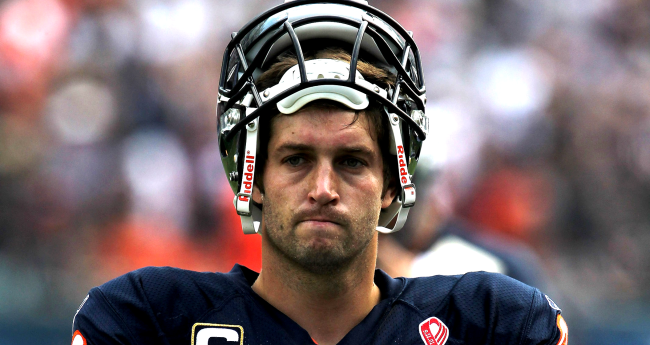 Jay Cutler, former NFL quarterback turned reality show star slash butcher, shared in a new interview with GQ some scary concerns he has about the injuries and number of concussions he suffered while playing football for over two decades.

Heck, in addition to be a star QB in high school, Jay Cutler played strong safety and made 19 tackles in the Indiana 3A state championship game.

Cutty, who played college football at Vanderbilt before joining the Denver Broncos, Chicago Bears and Miami Dolphins in the NFL, tells GQ, “I think I’ve damaged enough things and brain parts and heart and everything in my life, if I make it to 80, or anything after that, I’ll be happy.”

More specifically, when asked about the possibility of suffering from the effects of CTE (chronic traumatic encephalopathy), Smokin’ Jay believes that it’s a given.

“Oh, absolutely,” said Cutler. “I would say definitely my memory isn’t the same as it was five years ago. The amount of concussions I’ve had are probably in the double digits. It’s gonna catch up to me at some point. I’m just trying to delay it as much as possible.”

He says that in an effort to try and stave off the issues associated with CTE he has changed his diet, cutting down on sugars and ingesting “heavy amounts of fish oil.”

Cutler is also doing NAD therapy using IVs which, according to WebMD, “is used for improving mental clarity, alertness, concentration, and memory; as well as for treating Alzheimer’s disease and dementia.”

“I’ve noticed that that’s definitely helped me. Anything I can do these days, I’m trying to get involved in,” said Jay Cutler.

Despite his concerns, however, Cutler says that if he could go back he would still play football.

“Oh, absolutely,” said Cutler. “The relationships that I made, the memories that I have, the lifestyle it’s accustomed me and my kids [to]. It outweighs the benefits. In my mind. There may be some people that say, hey, that’s crazy. But I’d do it all over again, no question about it.

Of course, as any Chicago Bears fan of the past couple of decades will tell you, stress did not appear to be one of Jay Cutler’s health concerns – and it still isn’t, but he says the perception that he didn’t care bothered him.

“That was the farthest thing from the truth. I wasn’t going to go out of my way to convince the media or anybody else, as long as the guys in the locker room and the coaching staff were good and knew what I was doing. That’s all that really mattered to me.”

Read Cutler’s entire interview (they cover a whole lot more, including how he feels about the Smokin’ Jay Cutler meme) over at GQ.com.