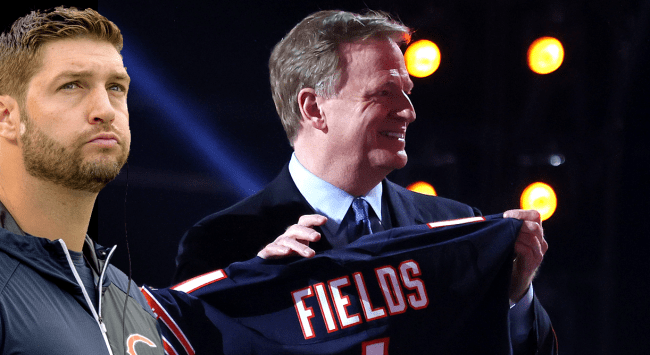 The Chicago Bears have, to put it mildly, struggled with the quarterback position for the last 70 years or so. The fact that Jay Cutler is the team’s all-time leader with just 23,443 passing yards is really all you need to know. Especially when you consider the team has been in existence since 1920.

Rex Grossman and Jim McMahon did at least lead the Bears to Super Bowls, with McMahon winning one, but even McMahon recently went on record saying, “I think it’s where quarterbacks go to die.”

Chicago has used 40 different starting quarterbacks since the year 1976 and not one of them is in the Hall of Fame.

And now, almost immediately after boldly proclaiming new addition Andy Dalton to be their new QB1, the Bears traded up in this year’s draft to select QB Justin Fields with the 11th overall pick.

So what are the Bears going to do? Keep Dalton as their QB1? Or start the highly touted rookie Fields when the 2021 NFL season gets rolling?

Jay Cutler has some ideas.

Speaking with Waddle & Silvy on WMVP-AM 1000 in Chicago last week, Cutler said, “I wouldn’t play the kid to start. That’s where I’d start. I’d let him watch. I think it’s just a tough spot to just throw someone out there, especially in Chicago. And I think Andy is more than serviceable. I think they can win games with Andy and kind of pull the ship along until (Fields) is ready.”

Smokin’ Jay added, “He’s obviously talented. He can move. He can throw. He won a lot at Ohio State. He seems to have a little chip on his shoulder, which I don’t think is a bad thing. But like we’ve talked about numerous times, when you’re playing quarterback (in the NFL), there are a lot of moving parts.”

Cutler recalled his rookie season in Denver and how he felt when he finally got the call to play.

“I remember the first game (of the season) and there were rumblings that I might play,” said Cutler. “And I was like, ‘I don’t even know what’s happening here. Let’s figure this thing out for a minute.’ We were in the old dome in St. Louis (in Week 1) and it was insanely loud. We had a million checks that game (as an offense). We were checking everything. And none of it worked.

Bears head coach Matt Nagy says his current plan is to bring Fields along slowly, but in today’s the NFL that’s easier said than done.

“Everyone’s different,” said Cutler. “I’ve just always been on the side of, what’s 10 games? What’s a season (of sitting) in the grand scheme of this kid’s career? If you believe he’s the guy, get everything set up so that when he’s thrown in there, he’s supported and he can make things happen the way he should instead of battling through all this stuff and seeing ghosts five years from now or three years from now.”

Cutty also brought up the fact that Peyton Manning, as good as he was coming out of college, set the rookie record for interceptions.

So what would his advice to Fields be?

“He came from Ohio State. He has played in big games before,” said Cutler. “So I don’t think he’s going to mind it much. But I will say this isn’t Ohio State. This isn’t college football. The playing field gets leveled really quickly in the NFL. You’re going to get humbled. Bad things are going to happen. You’re just going to have to deal with it.”

Fields can do that, or perhaps he can, as Cutler suggested to Mitchell Trubisky when things weren’t going so well for him, just “go underground.”