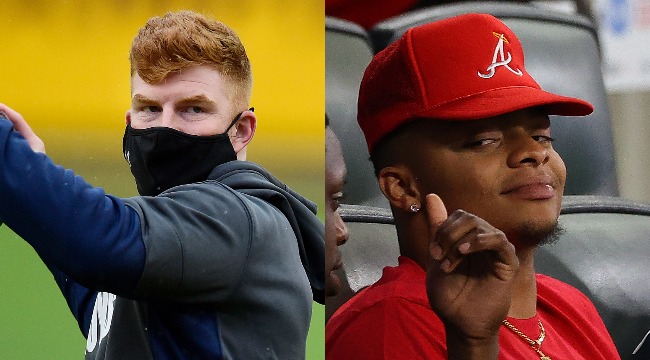 On Valentine’s Day 2004, Nina DeLuca accepted my request to go to junior prom. February was a bit premature to ask about an event in May, but I knew she’d be in high demand come April. I was right. Mike Breda, the star linebacker with a jaw chiseled from granite, asked her a full two months after me, and she gave me the ol’ Nevermind. I still think about it in the shower sometimes.

The Bears just Mike Breda’d poor Andy Dalton less than one month after declaring him:

Chicago traded up to No. 11 in the NFL Draft to secure shiny new quarterback Justin Fields, effectively giving Dalton $10 million next year to hold a clipboard.

“Matt [Nagy] has spoken to Andy Dalton tonight; that communication and clarity for us is really important,” General Manager Ryan Pace said Thursday night, via Jason Lieser of the Chicago Sun-Times. “Andy is our starter, and we’re gonna have a really good plan in place to develop Justin and do what’s best for our organization and win games.”

This is par for the course for the Bears. In 2017, the organization signed Mike Glennon, told him he’s the starter, and then traded up for Mitchell Trubisky. Why mess with a formula that works? NAHHHT.

In the wake of Fields’ name being called at Number 11 in Thursday night’s Draft, the internet fired up the Meme Machine and came correct.

Andy Dalton with the draft on in the background…. pic.twitter.com/JaUTPYSc0t

Andy Dalton when he sees Ryan Pace in the cafeteria pic.twitter.com/BBF16cCn92

Andy Dalton : So I’m going to be the Starter?

“With the 11th pick in the 2021 #NFLDraft, the Chicago Bears select Justin Fields.”