Jazz Chisholm Jr. Is The Coolest Player In Baseball After Making ‘Ya Mama’ Joke Over Umpire Incident 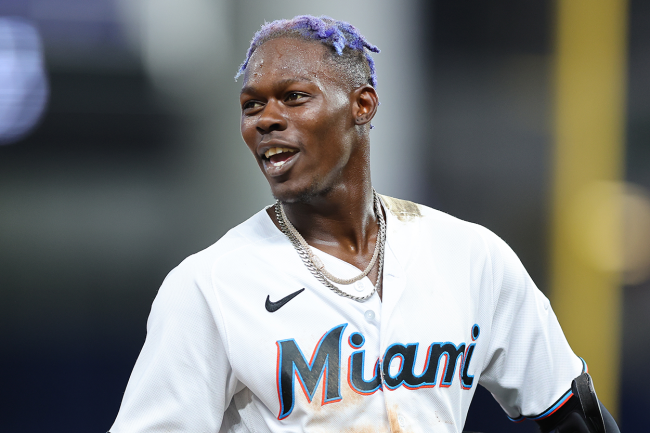 It’s not often that Major League Baseball produces a player with as much swagger as Jazz Chisholm Jr. The 24-year-old Marlins shortstop is turning baseball on its head, to some extent.

In a league that is often more subdued and is unable to promote its personalities, Chisholm Jr. is doing it on his own.

Not only is the Bahamas-native bringing the drip to the diamond, but he is backing it up with some loud play. On Thursday, he took things to a whole new level and cemented himself as the coolest player in baseball.

During the seventh inning of Miami’s game against St. Louis, Chisholm Jr. faced an 0-2 count and was taking his time getting back into the box. Home plate umpire Phil Cuzzi tried to hurry him up.

Chisholm Jr. gave Cuzzi the “chill, dude” hand signal, took another deep breath and then obliged and dug into the box. Cardinals catcher Yadier Molina tried to get his pitcher to quick pitch, but he didn’t get the memo, threw at a normal pace and proceeded to get rocked.

Watch the umpire attempt to speed Jazz into the box and Jazz promptly hits a blast on the next pitch. 💯@Marlins | #MakeItMiami pic.twitter.com/QiJZJevmtQ

Chisholm Jr. took him way deep for a home run and took a moment to admire his shot.

On his way back to home plate, Chisholm Jr. broke out his signature Euro Step celebration right in Phil Cuzzi’s face.

The entire exchange was cold as ice, but Chisholm Jr. wasn’t done there. After the game, someone on Twitter suggested that the opposing pitcher should drill him during his next at bat, to which Chisholm Jr. offered another idea.

Chisholm Jr. is everything great about baseball. He plays loud and has fun while doing it, even when the older generation tries to tell him otherwise.

Here is what he had to say after the game:

Jazz Chisholm Jr. walks us through the at-bat that led to his 7th inning home run after his interaction with Phil Cuzzi @Marlins | #MakeItMiami pic.twitter.com/IP4R88ACe6