NFLPA President J.C. Tretter Craps On League For Failing To Adapt To Virus And Not Prioritizing Player Safety 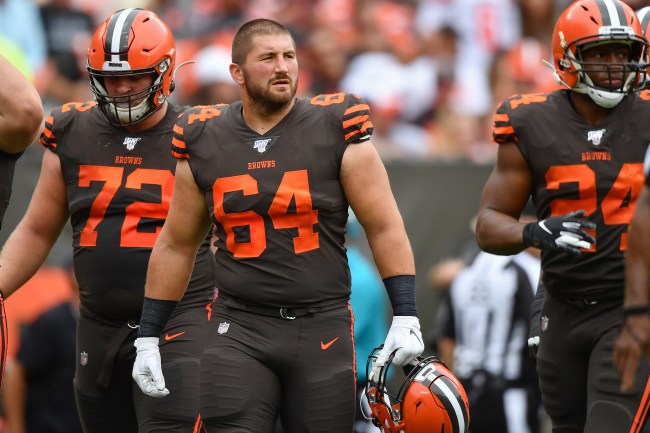 NFLPA President J.C. Tretter has a big responsibility to serve his fellow players, especially during these uncertain times with the ongoing pandemic and questions regarding the upcoming 2020 NFL season. While the league has always touted time being on its side to figure things out and adapt as necessary, Tretter doesn’t seem optimistic about some of the things the league has done (or failed to do), in response to the coronavirus.

As NFL training camps are scheduled to open later this month — which is hard to believe — Tretter, the Cleveland Browns offensive lineman, penned an open letter about his thoughts. The result? A full-blown shitting all over the NFL, with Tretter talking about the league failing to adapt from the way they’ve always operated, while pointing out the league ignoring player safety.

Posting his opinions on the NFLPA website, take a look below at some of what J.C. Tretter had to say — which is both candid and spot on.

Like many other industries, football’s resistance to change is based on the belief that the best way to run things is the way we’ve always run things. That pervasive thought process will stop this season in its tracks. Since March, we have had hours of return to work meetings, reviewed research and developed detailed protocols — all of which will be wasted if the NFL refuses to think and act differently when it comes to getting through a full season. Players don’t just want to return to work; we want to stay at work.

As a preventative measure during the COVID-19 pandemic, the NFLPA and NFL formed a Joint Committee of doctors, trainers and strength coaches to develop protocols designed to bring players up to full speed in a healthy way when they return. The NFL initially accepted and implemented the Joint Committee’s suggestions, including items like no joint practices and no fans at training camp. However, the NFL was unwilling to follow the Joint Committee’s recommendation of a 48-day training camp schedule. Despite these experts’ assessment that teams face a serious risk of player-injury spikes this year (based on past NFL data and recent findings from sports leagues that have already returned to play this year), the NFL is unwilling to prioritize player safety and believes that the virus will bend to football.

With Tretter serving as the strongest voice for the players in the NFL, the statement above sure comes across as bold. And, while not every player may feel the same as J.C. Tretter, one would imagine a strong majority do — and that has to be concerning to the league as it figures out ways to play the upcoming season. This is just part of the battle that team owners and the NFLPA has in store as it works towards the right plan.

After seeing what the behemoth lineman wrote, the league refused to comment. However, a league source called the op-ed “very disappointing,” according to NFL Network’s Tom Pelissero.

The NFL isn’t commenting on NFLPA president J.C. Tretter’s post, but a league source called it “very disappointing and contrary to the sense of collaboration going back to the early days of mid-March,” pointing to agreements on joint practices, no fans at camp, protocols, etc.

All of this comes down to money, as the league could lose billions if fans aren’t in attendance during the 2020 NFL season, or, worse, there isn’t a season at all. While everyone wants sports back — and it’s hard to fathom a year without football — medical experts don’t sound optimistic about the possibility unless things improve and it’s safe. It’s on the players, owners and league to figure out how to do that, because time is no longer on its side as it was a few months ago.