Dr. Anthony Fauci Warns It May Be Impossible To Play Football Safely This Year As The NFL And NCAA Gear Up For The Fall 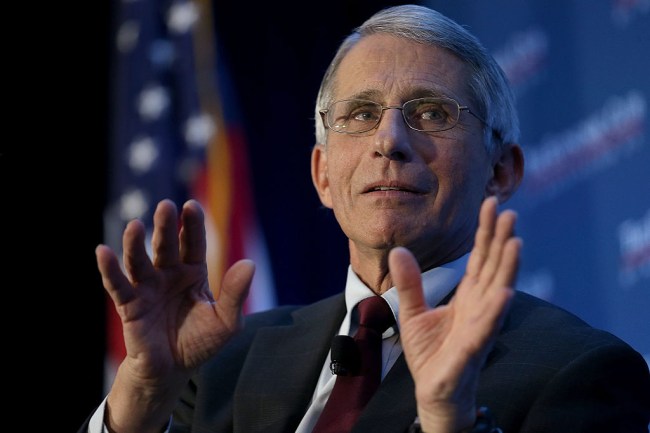 If you thought it’d be impossible for a global pandemic to turn into a political issue when the United States scrambled to address the highly contagious disease that started to spread throughout the country earlier this year, you are obviously not very well acquainted with politics, a realm where far too many people take a stance on an issue by simply looking at how those on the other side of the aisle feel about it before adopting the opposite opinion.

People who have devoted their entire career to preparing for situations like the one we’re currently in have done what they can to keep people safe, but sadly, there’s a significant chunk of the population that seems to have an inherent distrust of anyone labeled an “expert.”  It’s unfortunate, there’s only so much you can do to try to reason with those who view advice like “You should wear a mask because it’s an incredibly minor inconvenience that could prevent you from inadvertently killing someone” as a direct attack on their beloved liberty and freedom.

However, there’s been one high-profile figure who’s managed to gain the trust of more people across the political spectrum than any other member of the federal government in recent memory: Dr. Anthony Fauci, the longtime director of the National Institute of Allergy and Infectious Diseases who became one of the more trusted sources of information thanks to his contributions during White House press conferences in recent months.

Fauci hasn’t been in the public spotlight as frequently in recent weeks but he’s still monitoring the situation as diligently as ever while regularly offering his input into a variety of matters—including the current efforts to make sports a thing once again.

Last week, Fauci warned that we still have a loooooong way to go before the world becomes a relatively safe place, and while he gave the NBA’s plan to get back into action in Orlando his seal of approval, he also said anyone pining for a return to normalcy in the foreseeable future shouldn’t get their hopes up.

The NCAA recently approved a preseason plan that would allow college football to be played as scheduled this fall and the NFL has been putting together one of its own featuring a lengthy list of guidelines that John Harbaugh claims will be “humanly impossible” to adhere to.

However, according to CNN, Fauci seems to think it may be almost as hard for either of those organizations to play football in a safe and responsible manner this fall unless they harness a similar strategy as the NBA and said that the possibility will basically be off the table if the disease comes back with a vengeance later this year:

“Unless players are essentially in a bubble—insulated from the community and they are tested nearly every day—it would be very hard to see how football is able to be played this fall. If there is a second wave, which is certainly a possibility and which would be complicated by the predictable flu season, football may not happen this year.”

It seems reasonable to think the NFL could figure out a bubble-based solution if that was its only option, but based on what Fauci is saying here, we may want to start making alternative plans for the Saturday afternoons that are traditionally devoted to college football.